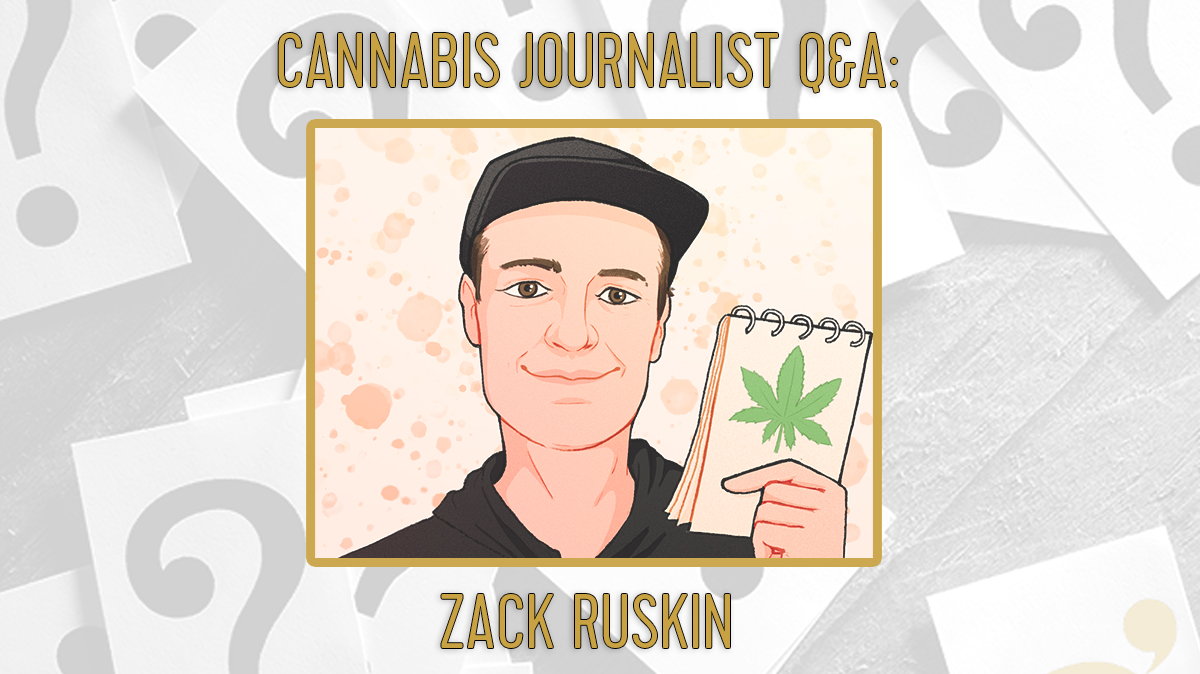 Zack Ruskin’s deep connection and affection for the San Francisco Bay Area shines through in his writing.

Ruskin, who initially wrote music album reviews and artist interviews, got his start on the cannabis beat in 2016 with SF Weekly. There he began a regular cannabis column that’s now called Pacific Highs (previously Chem Tales). He boasts an extensive list of publications he has contributed to, including Vanity Fair; Variety; Entertainment Weekly; Merry Jane; Cannabis Now; Bloom & Oil; LEAF Magazine (California); the San Francisco Chronicle and its subsidiary SFGATE; Sacramento News & Review; Interview magazine; Bandcamp Daily; Marin Magazine; Journal of Alta California; KQED; The Millions; The Rumpus; and Consequence of Sound, among others. He also has a newsletter on Substack called Rolling Stoned.

Ruskin grew up in Marin County, went to college at the University of California, Santa Cruz, and now lives in the Inner Richmond district in San Francisco with his wife, roommate (and best friend), and their cat, McCovey.

“I’m all about the Bay Area: hikes, the Warriors—from back in the Andris Biedrins days—weird treasures like the Musee Mecanique,” he says. “I’m just hopelessly in love with this city and its surroundings.”

In terms of his personal history with the plant, Ruskin first tried cannabis when he was a sophomore in high school.

“While I didn’t go to San Rafael High like the Waldos, I was only one town over in San Anselmo,” he says. “Regardless, we shared at least one thing in common: driving out to the boonies in West Marin to smoke as a rite of passage in high school. Going to UCSC obviously did nothing to lessen my access, interest or consumption in cannabis, but it honestly wasn’t until I was offered the reins of Chem Tales that my understanding of this plant—its healing potential, the lives ruined by laws made to ban it, and the cultures and communities that continue to champion it—truly started to take form.”

What are your favorite types of cannabis articles to write?

“My favorite in terms of the pleasure I take from it is getting to speak to someone who isn’t known for being a cannabis consumer about that side of their life. Take, for example, musician Jenny Lewis or former NBA player Matt Barnes. In both cases, their affinity for weed was well known, but people have multiple dimensions and I love getting to bring that out in hybrid stories that cover both cannabis and something else.

“I also take immense pride in my stories focused on restorative justice. I’ve been writing a lot more of those lately, focused on the release of those convicted of petty cannabis crimes and now serving draconian sentences, like Michael Thompson and Parker Coleman Jr. I feel morally obligated to do all I can for all the Michaels and Parkers who are out there and still behind bars. I feel like getting these people free and home to their families should be a mandatory precursor to anything else we may want to see happen in this industry.”

[Editor’s note: Thompson was granted clemency in December 2020 after serving 23 years; as Ruskin reported for Bloom & Oil in an Aug. 4 article, he was hospitalized with COVID-19 after being denied early release.]

Do you adjust your writing when you are writing for more mainstream publications versus cannabis-specific publications? If so, how?

“In some ways, I make no distinction. Cutting my teeth as a cannabis columnist for SF Weekly —the paper is neither mainstream nor cannabis-specific—it was basically necessary to find a voice that straddled that line right off the bat. It worked, so I’ve more or less used a variation on that voice with each successive outlet I take on as well. That said, I’d say the biggest thing I have to navigate is how much explaining I should do (plus how concisely I can pull it off).

“Naturally, that’s a matter of understanding a given outlet’s readership and then successfully writing to it. Equity programs, for example, are not something that can be explained in a sentence, so part of the work is to ensure you’re not alienating readers by talking over them, nor boring them with too much expository detail about regulations or scientific nitty-gritty.”

Who are some writers, cannabis or otherwise, that you admire?

“So many! On the cannabis beat, my must-follows include Donnell Alexander, Jackie Bryant, Jimi Devine and Dan Mitchell. I’ve also come to rely heavily on a trio of regular newsletters from Judd Legum, Luke O’Neil and Emily Atkin. They are each incredible at what they do. To add a few more, David Grann is mind-bogglingly talented at turning history into narratives of mystery and adventure, and I’m also a huge fan of Lisa Hanawalt’s collected comics. I spent 14 years working in indie bookstores, so I’ll stop myself before I write 500 recs!”

Where do you think the dialogue around cannabis is headed in 2021?

“Those who believe legalization is a given simply because the Democrats now technically control both chambers of Congress would be well served to revisit Charlie Brown’s success at kicking footballs. While I do believe there will be something akin to progress on this front, I don’t believe cannabis will be a priority for Congress in the near future.

“As that timeline hopefully grows slightly less murky, I think the conversation for now needs to majorly focus on how we get every last person convicted for a cannabis crime out of prison. We usually qualify this conversation with the phrase ‘non-violent,’ but the more bogus gun and assault charges I see used as a pretext to refuse a cannabis convict parole or a pardon leads me to believe we can’t narrow it down that way. Beyond this vital and urgent matter of restorative justice, as a reporter living in Northern California, I’m also very focused on 2021’s wildfire season.

“On a lighter note, I am genuinely thrilled to see so many equity dispensaries in SF and surrounding areas finally opening their doors! I want this pandemic over so they can have the grand openings they deserve.”