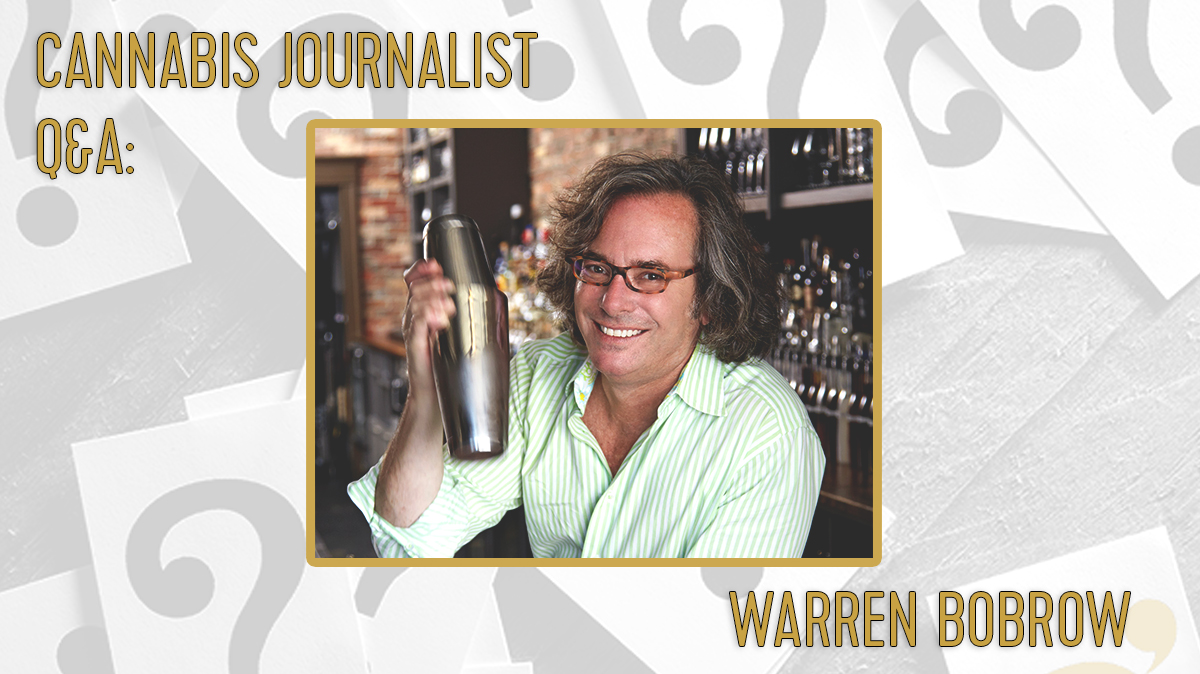 As a writer for Forbes, Warren Bobrow is constantly looking for the newest things in cannabis appreciation. Known as “The Cocktail Whisperer,” he wrote several books on cocktail culture before making a transition to write about cannabis-infused cocktail offerings, as well as luxury weed accessories and interesting innovations in the cannabis space.

Bobrow’s diverse background includes 20 years as a banker as well as time spent as a chef, restaurant reviewer and as the owner of a pasta company prior to venturing into cannabis journalism. He’s worked as a mixologist for several liquor brands and was the brand ambassador for an internationally housed, boutique rum company before deciding—both for emotional and health reasons—to quit drinking spirits in July 2018. He says he has since lost over 50 pounds and does not miss the drunken interactions.

Even though Bobrow has left the vibrant world of traditional spirits, he still retains a strong sense of the euphoria and joy that can come with altered states of consciousness, and he now makes cannabis infusions that get people absolutely “destroyed.” Bobrow says this was the case when he made cannabis cocktails on Viceland Live in February 2019. And his 2016 book Cannabis Cocktails, Mocktails & Tonics: The Art of Spirited Drinks & Buzz-Worthy Libations has plenty of examples of cannabis infusions that pack a punch. Of course, there are also many examples of infusions with moderate dosing.

Based in Morristown, New Jersey, Bobrow says he first tried cannabis as a 12-year-old at a Grateful Dead concert. Challenges within his family relationships and in previous business endeavors helped motivate his current push to define himself through self-ingenuity and personal drive, which includes embracing his quirks. He’s planning to launch a cannabis beverage in California named after his German drinking gnome, Klaus, in the summer of 2020.

How does your prior coverage of the cocktail scene contribute to your cannabis reporting?
“The passion for journalism left liquor for me. But I knew that I had talents for doing tasting notes, so I applied my knowledge of terroir to cannabis. Funny thing is, everyone is talking about terroir and appellation in cannabis now.”

What is your favorite way to consume cannabis?
“My favorite way is the way that is inconspicuous. It’s the way that allows you to enjoy your experience without anyone knowing your business. Smoke a joint in the street and you’re a stoner. Everyone knows what you’re doing.
Now, think of a new method, something so revolutionary that you are thirsty just thinking about it: A THC-infused spicy ginger syrup with French vergers Boiron lime juice, a touch of rice wine vinegar, two different kinds of aromatic bitters, one with orange, and the other with lemon. And of course the THC emulsion—nano-technology is what we call it. Molecular cannabis alchemy is what it is in reality.
“I’m pleased to demystify the process and make it delicious, memorable and utterly irresistible. No, it’s not another insipid seltzer, nor candy-flavored quaff. This is a craft cocktail without alcohol. Delicious in every way. That is my favorite way to consume cannabis, with a three-minute onset and a gentle comedown. Not like eating an unpredictable edible where the end result can be unpleasant to say the very least. My canna-beverage is named Klaus Apothicaire after my 1800s German drinking gnome named Klaus.”

Is there a time when you think we'll see a true blending of cannabis and cocktail culture? If so, when do you think that will be?
“I’m doing it now. I did it on Viceland Live television, they got destroyed on live TV, ask me… I do this for private parties—which ones? Confidentiality agreements are in place, I’ll never tell. I do them going forward, ask me about it. I’ve done them all over the country. Not quite what people expect, especially if they have been fooled by pseudo-mixologists dribbling scant droplets of CBD into a poorly made cocktail, then up-charging them a dozen dollars for minuscule driblets? Not me, thank you. When I build a cannabis cocktail, you know what you’re imbibing. It’s going to knock down a family of rhinoceros. OK, maybe not, but I didn’t write my book for recreational purposes. I have glaucoma and I use my recipes to lower my intraocular pressure. A win-win!”

Who is your intended audience? Who are you writing for?
“Anyone with an open mind to the possibility of combining the finest cannabis flowers money can buy in a carefully crafted mocktail, or a cocktail infused gently into craft-made spirits, the kind without added sugar or caramel coloring, fooling the consumer yet again with the thought that dark spirits mean old spirits. A marketing lie. But don’t get me started on the wool-over-the-eyes in liquor. When was the last time that you saw an ingredients label on a bottle of whiskey? Never!”