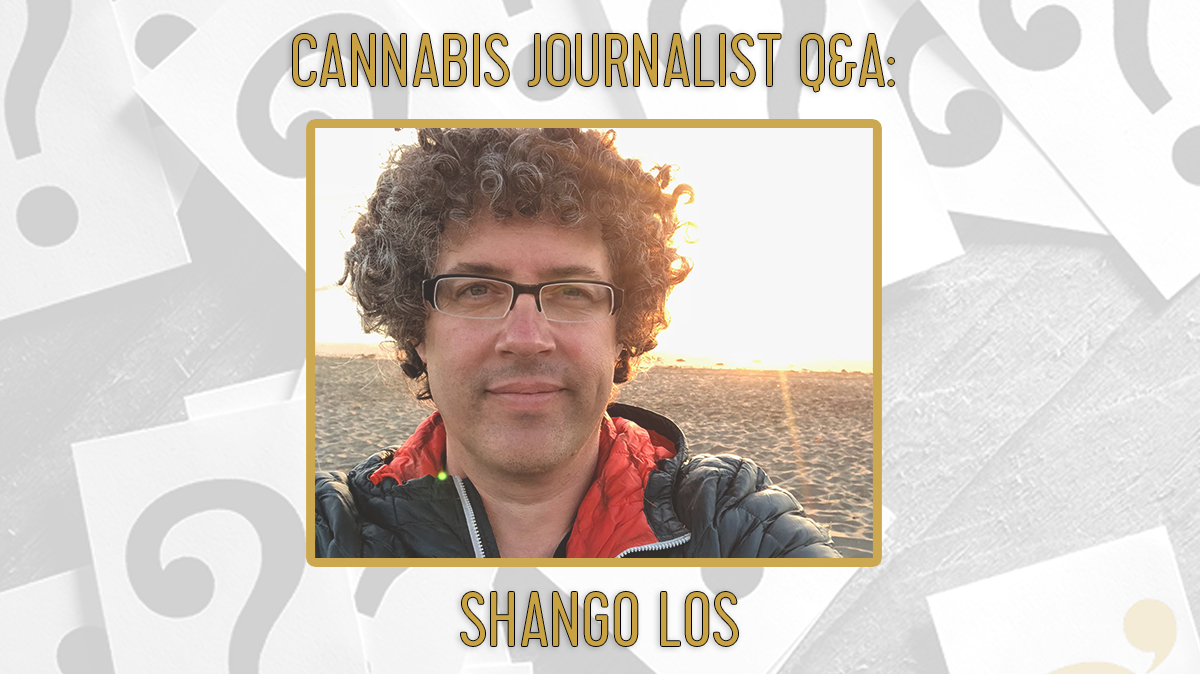 Shango Los is devoted to delving into experts’ insights and sharing helpful, research-based information about cannabis medicine, plant cultivation breakthroughs and much more.

Shango Los has a stunningly diverse professional background that includes creating technology for the space shuttle program, working in virtual reality and developing brand and business strategies for Seattle-based startups. Still, while he has long enjoyed cannabis on a personal level, it was a serious car accident in 2011 that set him on a focused path to study the healing aspects of the plant.

As the host of the podcast Shaping Fire, Los interviews some of the most intelligent scientific minds in cannabis when it comes to cultivation topics such as tissue cultures, light spectrums and the development of autoflowering and feminized seeds. His podcast also explores the medical applications of cannabis, including utilizing it to combat migraines or tapping into its palliative benefits during end-of-life care, for example.

Los grew up in Michigan and later graduated from Butler University in Indianapolis with a degree in political science, emphasizing U.S-Soviet conflict resolution. He also studied cyberpunk literature and said he learned how to smoke cannabis while watching Season One of The Simpsons. After following the Grateful Dead for a while after college, Los landed in San Francisco, where he became involved in virtual reality and the first dot-com boom of the mid 1990s.

He describes himself during that groundbreaking time as a kind of “technology evangelist” acting as a conduit of information. He laid the foundation for what his podcast was set to become as a platform for listening, understanding and conveying information. In this way, he sees his role in cannabis as a community service and follows the advice of author and motivational speaker Zig Ziglar: “You can have everything in life you want if you will just help other people get what they want.”

In 1998, Los moved to Denver for a year to work with NASA on its space shuttle program. There he helped to develop radio-frequency identification (RFID) technology used on space shuttle Flight 93 and the International Space Station. After his contract ended, he moved to Seattle and worked in tech and brand strategy; and for the past decade he has lived on Vashon Island across the water from Seattle.

In 2011, Los was in a severe car accident and suffered a traumatic brain injury (TBI). This set in motion his career shift into cannabis. In 2013, he founded the Vashon Island Marijuana Entrepreneurs Alliance and formed a cannabis trade organization. With the entrepreneurial alliance, Los assisted medical cannabis cultivators in moving their harvested crops into markets on the mainland. One of the strategies was buying cultivation materials in bulk to save money. By hosting regular cultivation events, some of the biggest names in cannabis came to the island to speak, including Dr. Ethan Russo, Kevin Jodrey, Jeff Lowenfels and Dr. Sunil Aggarwal, among others. In 2017, the “e” in the organization’s name was changed from Entrepreneurs to Enthusiasts to represent its evolving role as a social group dedicated to patient outreach and education.

In 2015, Los came on board with Ganjapreneur to launch a podcast. Between 2015 and 2016, he recorded 54 weekly episodes before deciding to go out on his own with Shaping Fire. His podcast touches on Los’s interests, cannabis medicine, cultivation and solventless concentrates, and stays away from trending news. Instead, Los says the idea is to focus on “skills and science.” Shaping Fire, now in its fourth year, typically releases two episodes a month that require a lot of research, reading and preparation on the part of the host.

In addition to the podcast, Los also posts the conversation on his YouTube channel. The channel also includes his appearances at cannabis conventions and now boasts over one million views.

When it comes to cannabis, Los’s expertise has been featured by many outlets, including a Newsweek special issue in 2016 focused on cannabis legalization and culture, where he addressed what it takes to open a retail cannabis business.

What are some of the futuristic forward-thinking ideas that you’ve heard when it comes to cannabis cultivation? Are there any particular techniques you are excited about?

“At the top of my list is the advent of modern autoflowering plants. Everyone loves impressive monster-sized plants, but not everyone interested in cannabis has the space required to grow them. While early autoflowers were poor yielding and with a weak terpene profile up until around 2014 or so, the contemporary seeds being released now in 2021 are more vigorous, higher yielding and with more complex terpene profiles. Premium autoflower breeders like Night Owl, Mandalorian, Mephisto Genetics and others have proven to be a fabulous asset to home growers, especially patients.

“I am also encouraged by the widespread growth in regenerative cultivation techniques by home growers and many commercial cultivators. Now that accurate soil science and technique are more widely available to cannabis cultivators, there is a burgeoning movement to incorporate natural farming techniques and stop relying on salt fertilizers that force-feed insufficient nutrition to plants while also making them swell with water, making them ripe targets for pests and disease. Even cannabis smokers are learning the importance of active microbe communities in the rhizosphere and the impressive impact living soil has on terpene profiles. Consumers are beginning to ask for certified regenerative flowers at retailers. I expect that this wave will continue to increase just like organic food has taken hold in the grocery market.”

How do you conduct research for your interviews on the podcast? Are you plugged into any specific scientific journals and studies about cannabis?

“I publish fewer episodes than most other podcasts because I usually need to read the research about the medical condition, soil science or botany that we will be discussing. I spend a great deal of time on sites like PubMed.gov and ResearchGate.net, reviewing the relevant research for each Shaping Fire episode. As background, I also read the guest’s books and / or published research papers and any interviews they may have had prior to talking with me. I never want to repeat ground that others have covered and always strive to provide the Shaping Fire audience with original thought on the topics they are most interested in like cannabis medicine, living soil science and solventless hash.”

What cultivars do you like to smoke, and how would you describe exceptional cannabis flower?

“My current favorite is Bickett OG (GMO x Cherry Pie) bred by Nick Risden of Lyme Rising Farm. It is new and not available in the licensed retail market yet, but with the attention it is getting on social media, from Shaping Fire, and the excitement of Wonderland Nursery’s Kevin Jodrey about the cultivar, I expect a lot of people will be talking about it come this fall when it does become more widely available in stores.

“Of course, one of the best things about cannabis is the wide variety available to us nowadays and I also really appreciate Pineapple Upside Down Cake from Humboldt Seed Company, ShapeShifter’s Freakshow, the Zkittlez crosses from Caleb Nspecta at CSI Humboldt, and while I have yet to smoke them, I am currently flowering many of the new Runtz crosses from Modern Epigenetics, bred by the beloved Michael Hinden, who was killed last fall. Michael’s work is being continued by his fiancée and business partner, Briana Reese.”

“For me, great interviews derive from a question path that helps the guest reveal the particular insights they have gained from their experience, a convivial atmosphere where the guest, the listener and I all feel relaxed and in the moment, and, of course, an interview that is complete enough to be considered actionable information. While many listen to Shaping Fire as entertainment, I always strive to reward the listener with a complete set of information, allowing them to take real action on the topic of the episode.

“Some of the extraordinary interviews that fall into that category for me are neurologist and cannabis researcher Dr. Ethan Russo, cannabis geneticist Ryan Lee, endocannabinoid researcher Greg Gerdeman Ph.D., analytical cannabis breeder Seth Crawford, sex therapist Chris Maxwell Rose, heritage cannabis breeder Mean Gene From Mendocino and breathing educator Robert Litman. These are all wildly talented people who can also describe their discoveries in clear ways that people can understand. As you can imagine, having published cannabis interviews now for six years, there are far too many greats for me to list here and I suggest people check out ShapingFire.com and find topics that excite them.”