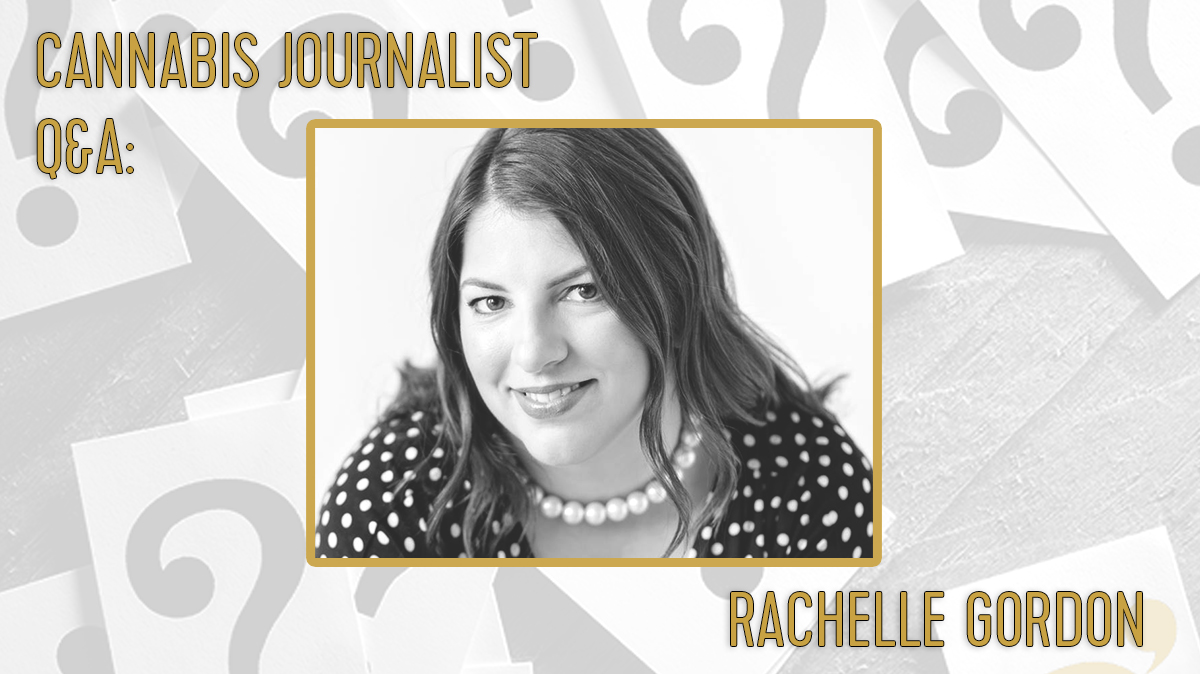 Those who attend cannabis conventions and events across the country have likely already met Rachelle Gordon. The bright and bubbly Wisconsin-born cannabis journalist could often be found conducting video interviews on the floor of busy trade shows and says she was first called to the plant at age 15, when she quickly fell in love.

Gordon’s path to cannabis journalism is fairly unique as her background includes nearly a decade in early childhood education before a run-in with the police caused her to shift careers. Gordon studied social justice and early childhood education during college in Minnesota, taking a break between her junior and senior year to spend eight months as an au pair in the Netherlands, where she says many lazy afternoons spent in Dutch cannabis coffeeshops solidified her passion for the cannabis plant. When she returned to the U.S. she worked as a substitute teacher and an educational assistant for students with special needs.

At that time Gordon says she was living the “trap life” in St. Paul and, when her home was raided by police in October 2011 concerning cannabis, she faced two third-degree felony possession counts. Gordon was able to enter a diversion program, which meant her charges were dropped after more than a year of things like regular drug court appearances and drug tests. However, as Gordon continued to feel the direct impact of the War on Drugs, she was forced to leave her employment as an educator which eventually led to the start of her career in journalism.

Gordon’s work as a reporter and video producer with CFN Media afforded her the experience to travel extensively to conferences and events throughout North America, connecting with CEOs, thought leaders, advocates and everyone in between from across the supply chain. She’s also contributed to many cannabis publications and media companies including High Times, Cannabis Now, Sweet Jane, MG Retailer, Cannabis & Tech Today and Green Flower Media.

Why did you choose to write about cannabis? What kind of stories are you drawn to cover?

“I have been a devotee of the cannabis plant since I was a teenager, but I never could have dreamed all those years ago that being a weed writer would ever be a thing for me. I started finding freelance gigs in the legal industry as legalization started to ramp up, probably around five years ago. I was elated to have the chance to enter the space on the ground floor, it meant so much to me to be a part of history as it happened, especially as a person who went through the criminal justice system on a felony possession case.

“My favorite stories typically revolve around people whose lives have been positively impacted by the plant. This could be a medical cannabis success story or even just a good-hearted person whose dreams came true because they built a brand others love. I'm extremely sappy and love when good things happen to good people, especially if it involves herb. If I am moved to tears during an interview, which happens frequently, I'm satisfied.”

How do you apply your background in childhood education to your work as a cannabis journalist?

“Not many people know I worked in early childhood education for nearly a decade before I got into the cannabis industry. As a teacher, I learned very quickly you can never make assumptions about any person or situation. You have to approach people, whether they're 3 years old or 30, on their level and pick up on both verbal and non-verbal cues to determine what they're really trying to express.

“I am already a naturally intuitive person, but working with young children gives you an almost supernatural ability to understand things on a deeper level. Additionally, educators tend to have a lot of compassion and empathy. I think this has all helped me as a journalist because I find it easier to build a rapport and a level of trust with interview subjects, making the conversation more natural and free-flowing.

“Early childhood education also forces you to be creative and adapt to situations quickly, you never know what a day could bring. I was a substitute for many years, adding an extra layer of unpredictability. If the kids weren't responding to the material, we would mix it up. Journalism has a similar nature in that you never know where an assignment will lead you; you have to dive in headfirst with an open mind and open heart, much like teaching.”

Your cannabis coverage has included extensive travel throughout the U.S. How does your exposure to many different marijuana marketplaces contribute to your coverage?

“Every cannabis market is so different and I find it simply fascinating. This is especially true when it comes to comparing legal markets to traditional “legacy” markets, even within the same city at times. Seeing bootleg Sherbinskis on a delivery menu in DC was particularly funny. That's a development I have found to be very interesting, the counterfeit products scene.

“I find that people are curious about other markets so I try to make sure to give accurate and engaging representations. I never assume someone has visited. It's fun to make friends in different cities. I may often travel alone, but I never feel lonely. Every trip is a chance to make new friends and see the old.”

Do you have an audience in mind when you are writing? If so, who are you writing for?

“I try to appeal to everyone, whether they're a seasoned smoker in the Bay Area or a canna-curious mom in the Northwoods of Wisconsin. I want readers to feel informed without being overwhelmed. Of course, assignments often vary and depending on the publication or website, there are going to be some differences in the potential target audience as it relates to messaging. I would hope though that my work is always approachable and engaging, regardless of the target audience.”