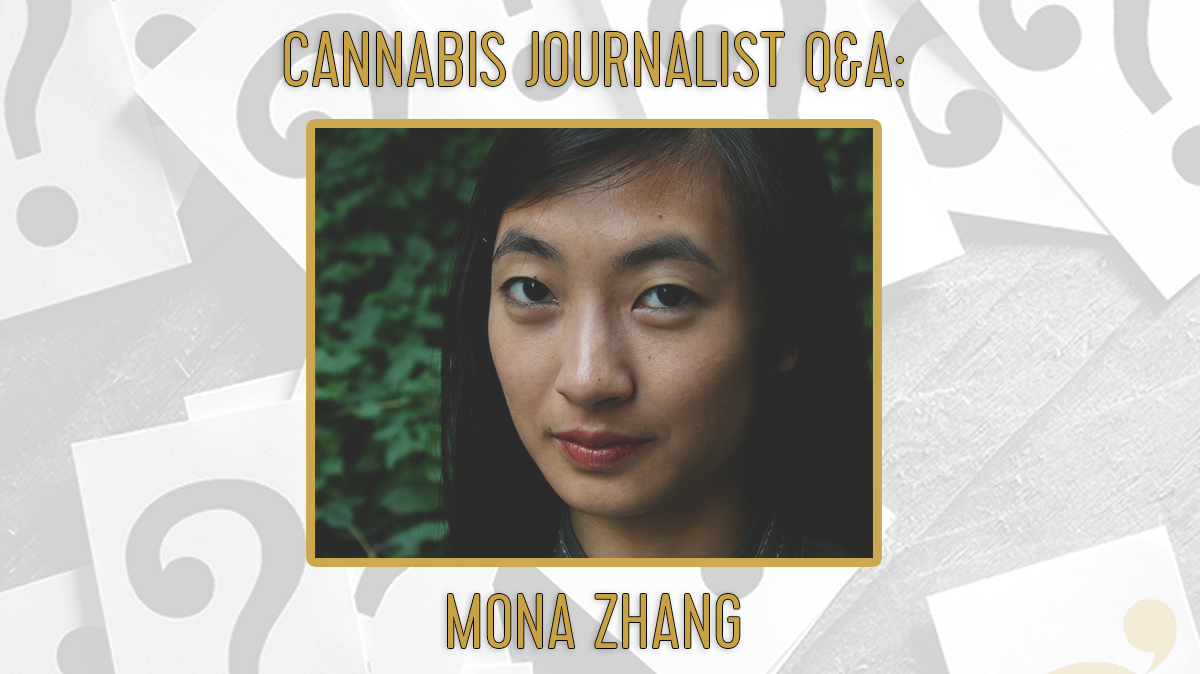 Based in New York City, Mona Zhang is the States Cannabis Policy Reporter for Politico. While Zhang got her start in journalism covering media and tech for Mediabistro and working as social editor for Adweek, she pivoted towards cannabis reporting a few years into her career. Zhang earned her degree in journalism from NYU in 2012.

“I actually started thinking about cannabis journalism, or lack thereof, when I was still in J-school,” she says. “Back then, it seemed like High Times was your only option. After working in various journalism jobs for a few years, I started to think more about the cannabis beat. I felt like ‘capital-J journalism’ was lacking on the subject and I was really interested in the criminal justice issues surrounding marijuana policy.”

In 2015 she started covering cannabis as a freelancer and founded and edited her cannabis newsletter, Word on the Tree. Her cannabis coverage has appeared in Forbes, The Outline, Vice, High Times and more. She joined Politico for the launch of the cannabis vertical in 2019.

What type of stories do you gravitate towards covering?

“As my job title suggests, I’m fascinated by all things cannabis policy. What are the trends on the state level and how does that impact state marijuana programs? It’s been interesting to follow the evolution of marijuana policy at the state level and how that’s shifted to focus on social equity. And, of course, how state-level reforms are impacting the discussion on the federal level. Cannabis policy intersects with so many different issues, whether it’s criminal justice reform, banking, international treaties, anti-trust—there’s never a dull day on the cannabis policy beat.

“I also love delving into more investigative-type pieces. There’s a lack of investigative and accountability journalism in the cannabis space, whether it’s industry, government or advocacy related. After writing about cannabis corruption issues, I got *so many* tips about cannabis corruption all over the country. It’s sad to see what’s happening with local newspapers across the country because these are the types of stories that local reporters would be well-positioned to cover. To be clear, some local papers are doing an excellent job reporting on cannabis corruption issues. We could always use more reporters on this beat, though!”

How do you keep track of all the changes in cannabis policy?

“For cannabis news in general, I use RSS feeds, Google alerts and Twitter. As a Politico reporter, I love having access to Politico Pro tools for subscribers. There’s a tracking service called Legislative Compass that tracks bills in Congress and also all state legislatures, so I can set up alerts whenever there are mentions of marijuana in federal or state legislation. There’s also a tracking service for federal regulatory updates, which is useful for following hemp developments in agencies.”

Where are some of the areas generating cannabis news that you are paying attention to now?

“How state legislatures are addressing criminal justice and social equity issues in legalization legislation. Illinois was hailed as a leader on this front when the legalization bill passed in 2019. But during Virginia’s legalization debate, lawmakers often referred to Illinois as a cautionary tale. It’s interesting to see how lawmakers considering legalization are learning from the states that came before them.

“I also love following the hemp industry more broadly. Industrial hemp has the potential to impact so many different industries. Even though hemp is federally legal, there’s still a patchwork of state CBD laws conflicting with federal law, and hemp producers face many of the same challenges as marijuana businesses (i.e. banking).”

How do you think the cannabis industry could better address social justice issues when it comes to legalization?

“There is a lot that the industry is doing already, whether it’s investing in minority-owned businesses, providing support for social equity applicants and advocating for equitable legalization policies.

“While reporting a story recently on private sector social equity efforts (paywalled), former Massachusetts Cannabis Control Commissioner Shaleen Title and Hood Incubator Co-founder Lanese Martin had interesting things to say on this front—namely skepticism for looking to cannabis companies to address social justice issues. They both pointed out that it was not these companies or their executives that were enforcing drug laws in neighborhoods disproportionately impacted by marijuana enforcement. It was the government.

“Private companies’ priorities are maximizing profits. So efforts to address social justice issues often amount to PR plays. Can we expect the private sector not to look out for their bottom line first and foremost? I think Martin said it best: ‘All of them [public and private sector] are going to have pitfalls! It’s about the strength of them all working together.’”