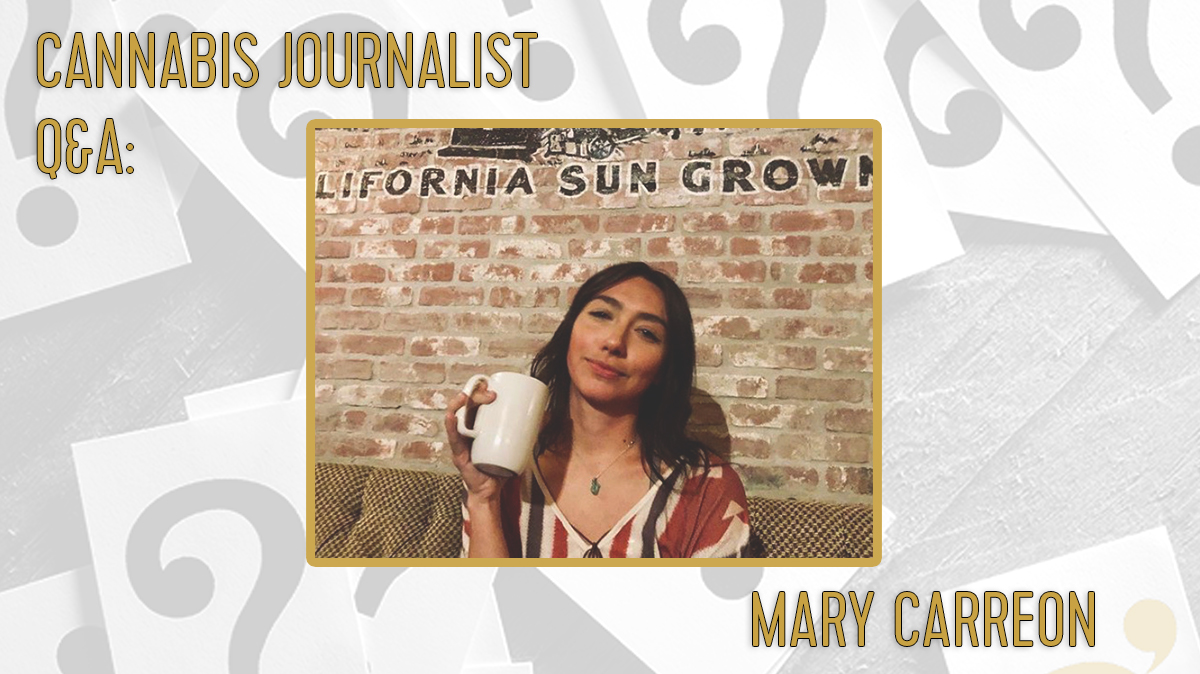 Mary Carreon became a writer because she took a chance on herself. She became a cannabis journalist when she took another chance in assuming that the person who was interviewing her for a full-time position would also be down with weed.

Carreon, now the associate editor at Merry Jane, got her start as a journalist through an internship at OC Weekly, a California alt-weekly publication. Carreon heard about the position when her Chicano literature teacher at her community college asked if anyone would be interested. She turned out to be the only person who raised their hand.

“I didn't think I was going to get the internship—I’d never written a story in my life—but I applied anyway,” she says. “I ended up getting the internship because of my enthusiasm for literature and writing, and the teacher who recommended me was good acquaintances with the editor responsible for choosing interns. I hated Orange County so much at the time because I wasn’t—and am still not—conservative, Republican, rich or white. But OC became a lot more manageable after I started reporting on it.”

Six years later, Carreon applied for a full-time staff writing gig with OC Weekly, a position that began with a few anxious moments.

“I was told to meet the managing editor at a local coffee shop, but there are two in town. Of course I went to the wrong one,” she says. “When I got in touch with the editor who was interviewing me and realized I wasn’t in the right place, I floored it down the freeway—literally going 100 mph—to get to the other location that was 20 miles away. I got there in about 13 minutes. As soon as the editor and I sat down, he asked, ‘So, what can you write about?’ I felt rushed and crazy and had a mini-acid flashback to a college professor telling me ‘write about what you know.’ So, trying to play it cool, I said I could write about weed.

“It made my stomach drop! I thought I killed the interview. I’d never talked with an employer about weed before, let alone imply that I use it. But I ended up getting the job because my editor was looking for someone who could cover the OC weed beat. It was kismet. I won four journalism awards during my time there.”

Since her departure from OC Weekly in 2018, she’s written for Forbes, Kitchen Toke magazine, Sensi Magazine, DoubleBlind magazine and The LAnd magazine, among others.

Based in SoCal’s Playa del Rey, Carreon also had a stint as a news editor at High Times: “While I was there, I wrote a piece about why the cannabis industry deserves better than (former U.S. House Representative) Dana Rohrabacher, who actually sucks, despite providing protections to MMJ businesses,” she says. After High Times, I went to Merry Jane, where I’ve been ever since—coming up on two years this April!”

Cannabis journalism covers a huge range of topics. What areas do you like to focus on?

Who are some of your cannabis and psychedelic heroes?

“Cannabis heroes: Mila Jansen; Captain Jack, the weed dealer for SNL in the ’70s; Charlotte Figi (RIP); the Weed Nuns; and Ronnie Bevan, one of the hash smugglers from the brotherhood of eternal love.

How has the cannabis scene in LA changed since legalization?

“The cannabis scene in LA has become divided since legalization. Long before 2018, there was a tight sense of community between businesses. Now, there’s a low-level war between the legal and the OG markets—people throwing each other under the bus, ratting each other out, etc. It’s ugly!

“Legal weed is also far more expensive than it was pre-legalization, which drives consumers to the ‘original market.’ That obviously doesn’t fly well with legal brands. Further, legal businesses aren’t making much money from the industry, thanks to the outrageous fees and taxes at every step of the supply chain. Sadly, this is all caused by a poor regulatory framework implemented by the state. So that sucks.

“The industry has also become increasingly bougie. I don’t hate it. I recognize there’s a market for it. But, you know, it’s weird to see how it’s evolved from bong rips and homemade weed brownies into high-end weed champagne and fancy 10mg gumdrop edibles that cost $50.”

Where are some of the favorite places that you've visited to cover a cannabis story?

“During my tenure at High Times, I went to Vancouver to cover the launch of a new weed brand. They didn’t have any weed at the weed event, which was weird. But British Columbia was beautiful. I love the scene up there. My whole adult, weed-smoking life I’d heard about the legendary ‘BC bud.’ After getting my hands on some, I can truthfully say it is as good as legend says.

“We smoked a Blackberry strain the first night, and I was distinctly higher than usual. Maybe it was the altitude getting to me? I don't even know if Vancouver is at altitude. Maybe it was jet lag? Or, maybe the weed there really is that good. Regardless, if you like dense, fluffy, trichome-covered weed—GO TO BC. There’s also a dope dab bar scene. I recommend going to New Amsterdam!”