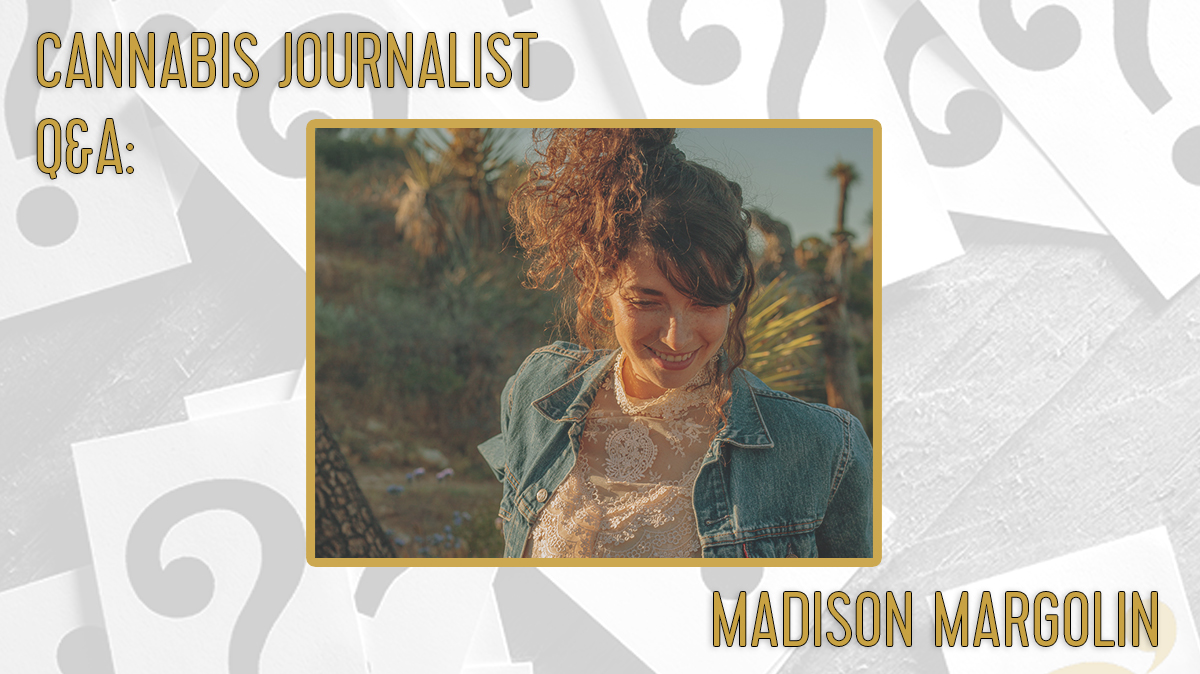 It was a heartbreaking rejection that pushed Madison Margolin further toward her position as one of the most recognizable journalists on the cannabis beat.

With bylines in Rolling Stone, Playboy and Vice, Margolin is now the co-founder and managing editor of DoubleBlind Magazine, a publication focused on the expansion of psychedelics across the globe. And, while she may have a father with a notable name in the cannabis space, Margolin notes she has never used him as a connection for a source as she discovered her passion: reporting and writing about how entheogens such as cannabinoids and psilocybin can be used for wellness and spirituality.

Margolin got her start in cannabis journalism with an article about New York’s nascent medical marijuana program that she pitched to The Village Voice while still attending Columbia Journalism School. Having grown up in California, Margolin was more than familiar with the West Coast weed scene, but said she was still unfamiliar with what was going on in other states. Despite this fact, not only did The Village Voice accept the pitch, it offered her a fellowship based on her covering the full rollout of New York’s medical marijuana program.

Not long into her time at the Voice, however, the publication changed ownership and began cleaning house by firing its editors. As part of this shift, Margolin’s editor told her that her drug coverage was not only passé and cliché, but that she would not be offered the staff position she had been promised after her fellowship ended.

Of course she was devastated, but not defeated. Margolin had discovered a passion for cannabis journalism and started freelancing for several publications including Leafly, High Times, The Progressive magazine and Tablet Magazine. She also picked up regular columns or permalance positions for publications such as Merry Jane, LA Weekly, Motherboard - Vice, Miss Grass and the now-defunct Jane Street.

“Now I see that not getting that job was a blessing in disguise, since it pushed me to hustle as hard as I could and get bylines in national publications,” she says.

Margolin’s father is famed California criminal defense attorney Bruce Margolin, who once represented Timothy Leary and is known for dedicating a substantial part of his practice to helping individuals fight marijuana charges. He is also the director of NORML’s Los Angeles chapter and ran for office multiple times on a platform supporting cannabis legalization, including a run for governor against Arnold Schwarzenegger complete with a radio jingle by the Kottonmouth Kings: “1-800-420-LAWS, Bruce Margolin’s down for the cause.”

Margolin’s sister Allison is also a cannabis lawyer. While initially Margolin thought that she, too, would become an attorney defending clients facing cannabis charges, her nerves wouldn’t let her get through the LSAT, so she pivoted to journalism instead.

After getting her byline in an impressive number of mainstream publications, Margolin took on a role as associate editor and then features editor at Civilized. When Civilized went through a corporate takeover and experienced mass layoffs in late 2019, Margolin was ready to pivot yet again and put all her efforts into her magazine, DoubleBlind.

Margolin is based in Los Angeles, but often travels to the San Francisco Bay Area as well as New York. Alongside her cannabis and psychedelics coverage, Margolin also often writes about Jewish culture.

What story elements are you looking for when it comes to choosing cannabis topics to cover?

“While I haven't always had full say in the stories I cover—sometimes I just take assignments because hey, we all need to eat—generally, when I'm pitching and reporting my own stories I look for the intricacies of certain policy or scientific developments. I ask myself, who’s affected by this, is this a positive / negative / complex development for the movement, how does this intersect with other systems, agriculture, medicine, religion, etc., and is there a fun narrative scene and character to drive the story forward. I like interviewing weirdos, hippies, freaks, as well as scientists, heads, nerds, policy experts, regular people who need medicine, etc., as well as diving into interesting environments and settings that will make a story come to life.”

Who is your intended audience?

“Anyone who cares about cannabis or psychedelic policy, science, culture, justice (criminal, social, environmental), and / or spirituality and religion. I can adjust my writing for any kind of audience.”

“I always say that psychedelics are about five to 10 years behind the cannabis movement. There are a lot of parallels, both in grassroots activism and policy, but also in the mainstreaming of these medicines, such as that CBD is sort of parallel to microdosing as a way to dip your toes without getting high. It’s also interesting to follow the synthetic versus whole-plant / fungus debate, since the entourage effect also applies to everything from psilocybin mushrooms to 5-MeO-DMT. And then, of course, there’s the perspective that cannabis is a psychedelic, and all these substances, when used with the right set and setting, have the potential to make us feel ‘well’ and engender a spiritual connection.”

How do you explore themes of spirituality in your cannabis writing?

“Whether it’s THC or LSD, these substances can show you the way, but they aren't the path to God / higher power in and of themselves. I'm very passionate and curious about how people use cannabis and other entheogens to enhance spiritual practice, connect to the divine and to their own inner souls and spirits. I have looked into this in Judaism and Hinduism, but also in reporting on other religions, too. For example, Jesus’ holy anointing oil was basically a cannabis topical! And he went around ‘healing’ people, but back then, the medicinal and spiritual uses of different plants / drugs weren’t so distinct. Medical versus recreational cannabis policy designations would have us thinking that there’s this binary, but really, medicine can be fun, and doing something recreationally can also be therapeutic, and these different aspects are connected by the idea that you are connecting to something within yourself or greater than yourself.”