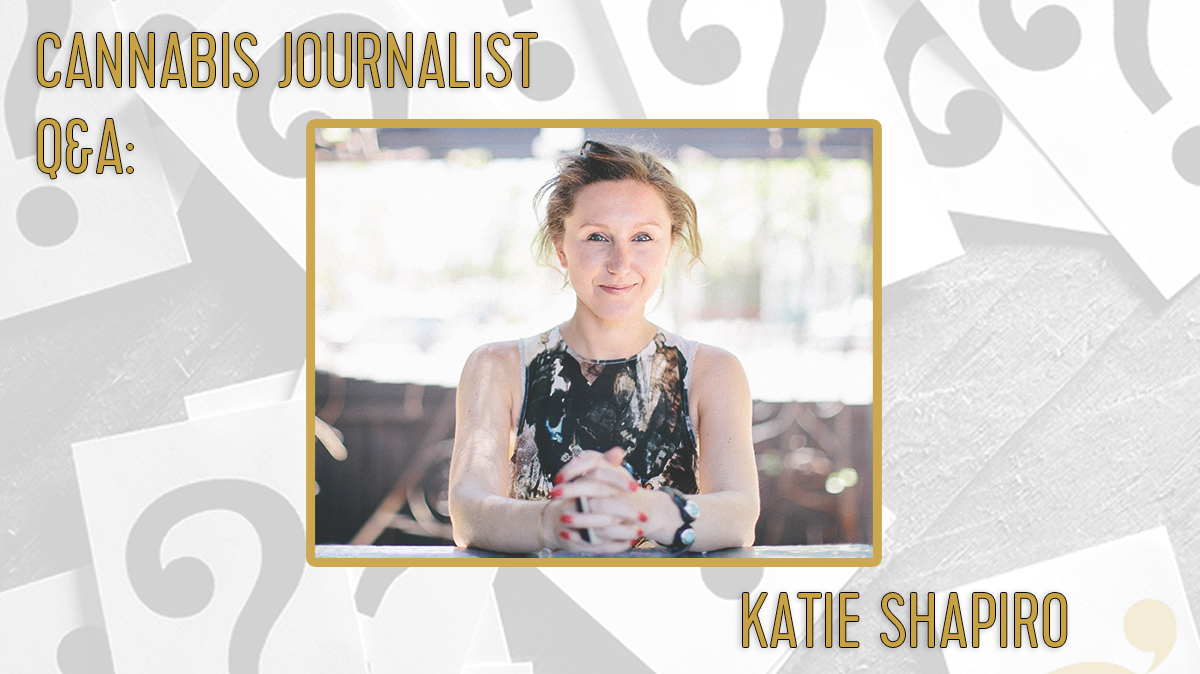 Katie Shapiro stepped into the cannabis journalism beat at a very opportune moment. As the “world’s first marijuana style writer,” Shapiro launched a style section at The Cannabist, a groundbreaking online vertical of The Denver Post, right as legalization took hold in Colorado in 2014.

Since then, Shapiro has continued to cover lifestyle news in Colorado’s ever-evolving legal marijuana marketplace, penning the “High Country” column for The Aspen Times, and also writing about the intersection of luxury and cannabis as a senior contributor for Forbes.

Originally from Ohio, Shapiro worked in advertising and public relations for beauty-based clients in New York City for nearly five years before relocating to Denver in 2007. She became the PR director for Denver Magazine while earning her master’s degree in journalism at the University of Colorado, Boulder. When that magazine was bought out in 2011, Shapiro started Katie Shapiro Media, a company that specializes in consulting and production for independent films and film festivals, and also began working as a freelance journalist.

Beyond cannabis style, Shapiro often writes about her other interests, film and travel. Through her company, she’s worked with clients including Aspen Film and the Denver Film Society, and has produced films including Rolling Papers, a documentary that chronicled cannabis coverage at The Denver Post. It debuted at South by Southwest in 2015 and was later widely released on Netflix.

It was her work as a producer of the film, which followed Ricardo Baca (yes, Grasslands’ own) through his first year of building The Cannabist, that led her to pitch a cannabis style section based on a few counterculture items she owned: a pair of peace sign cashmere gloves, a vintage lighter necklace and a cast aluminum ashtray her mom had passed on from an artist in her hometown.

Shapiro is now based in Aspen, Colorado, and prides herself on blending global trends with the alpine aesthetic.

You've covered the Colorado cannabis scene since its very beginnings. What are the biggest changes you've noticed as the industry continues to evolve?

“Everything has changed. When I started, I sometimes found myself really reaching to find cool smoking accessories, events or cannabis-inspired clothes. My first-ever cannabis beauty story was a roundup of patchouli scents (lol!), and now there’s an entire CBD wellness subindustry projected to hit a sales figure of $4.75 billion in 2020 alone. As coined in ‘Rolling Papers,’ The Cannabist was at ‘ground zero of the green rush’ when we set out to cover cannabis culture as it unfolded in Colorado. What was once very localized is now a global conversation.”

How do you find ideas for stories?

“There is definitely a lot of noise though (and endless email pitches) to sift through, so working with a cannabis-specific, journalism-minded agency like Grasslands makes my job a lot easier. Every morning, I dedicate time to news—some of my must-check email newsletters are Marijuana Moment, WeedWeek and MJToday Media; I read The New York Times, The Wall Street Journal and The Aspen Times (support local journalism!) daily. Although I’m not personally active on Instagram (Facebook’s company-wide censorship of cannabis content is nonsensical), it’s a good place to keep tabs on cannabis brands, from learning about launches to discovering personalities. And I test as many products as I can and stop into different local dispensaries to see what’s new.”

What type of cannabis coverage excites you the most?

“Since joining Forbes in 2018, I have absolutely loved covering the intersection of cannabis and luxury—a niche within the market that started to explode around the same time. Being based in Aspen, where luxury can be a way of life, I applaud the cannabis companies dedicated to elevating the experience (and shedding the stigma) into one that’s no longer hidden, but that has a place alongside food, wine, travel, art and fashion.”

Who has been one of your favorite people to interview so far? Why?

“In 2015, I had the opportunity to sit down and talk to NORML founder Keith Stroup during a barbecue—the culmination of the Aspen Legal Seminar—at Hunter S. Thompson’s former compound, Owl Farm. Without his fearless and tireless work advocating and organizing for the decriminalization and legalization of cannabis, which dates back to 1970, the industry as we know it would not be a reality. I’ve been lucky enough to attend every year since (sadly, 2020 was cancelled), and spending a summer weekend learning from and celebrating with the pioneers of this movement is incredibly special.

“I also got to interview Bob Weir, Bill Kreutzmann and Mickey Hart at the Sundance Film Festival in 2017 before the world premiere of Amir Bar-Lev’s four-hour epic documentary, ‘Long Strange Trip.’ My inner Deadhead was high on life that night.”