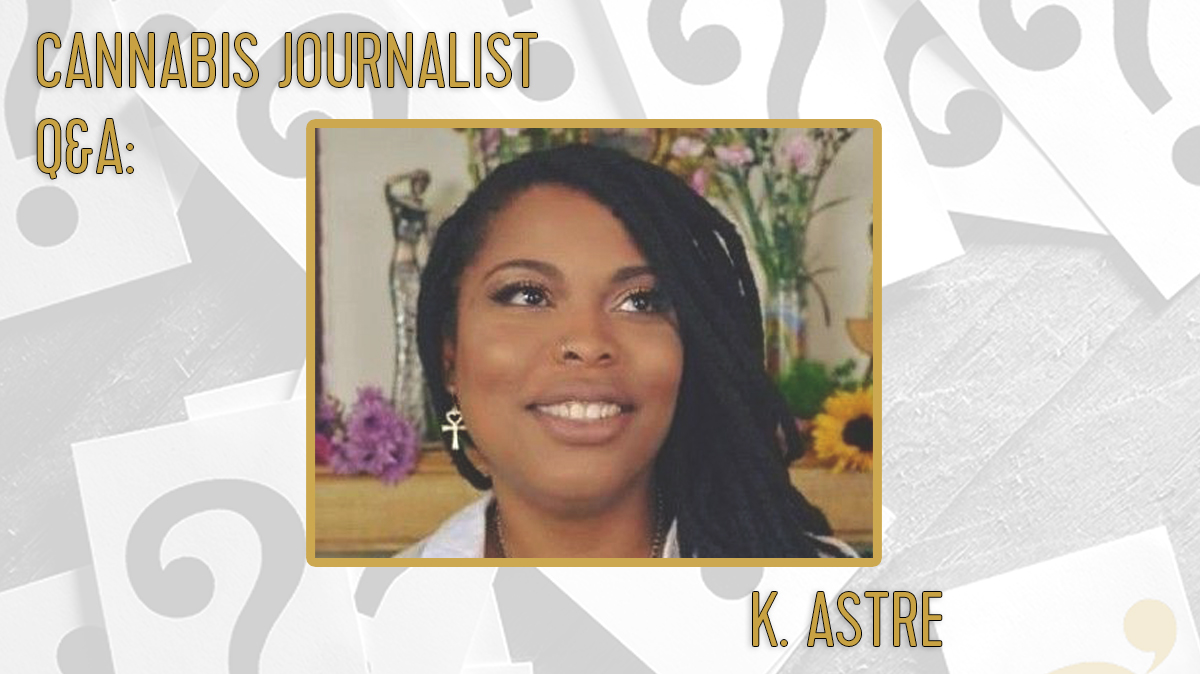 When it comes to talking about herself, K. Astre might not have much to say, but there is a strong likelihood that if you’re reading about cannabis, you’ve read her work. Originally from Sacramento, California, Astre contributes to several publications including Leafly, High Times, Merry Jane, Hemp Magazine, Forbes and the Huffington Post. Astre is also a former editor of Cannabis Now Magazine, where she used her creative drive and approachable writing style to capture cannabis culture in real-time through book reviews, farm and strain profiles and helpful how-to's.

Astre began her journalism career on the arts and culture beat in San Francisco, covering concerts and art gallery openings. She transitioned into cannabis journalism in 2013 and shines in lifestyle coverage, but isn’t limited to that realm. Astre’s also taken on subjects such as the science behind how terpenes affect the body and how to encourage an optimal balance of endocannabinoids. Her cannabis coverage often centers on cannabis as a tool for wellness and self-care. A self-described “California baby,” Astre spent some time living in Johannesburg, South Africa before moving to her current base in Portland, Oregon.

What type of cannabis stories do you like to write?

“I love to write stories that normalize the use of cannabis and expose the unnecessary hierarchy between people who believe they are connoisseurs versus the regular consumer. Lifestyle and culture pieces are fun for me because I get to go be a part of an evolving story that highlights real people, real issues and how they all fit together whether it's something lighthearted or serious. Some of my favorite pieces have been written after visiting a cannabis BnB, trying obscure but highly sought out strains for review, and talking with incredible trailblazers in the industry like Sue Taylor and Andrea Drummer.  Recently, I have been drawn more to the science side of cannabis as I begin to gain a deeper understanding of biochemistry. It has really expanded my lifestyle writing in ways I couldn't have imagined.”

Who is your intended audience?

“When I'm writing, I am talking to the person who thinks weed is just weed. I'm not ever trying to convince anyone to change their mind about how they feel or what they think they know, but it's exciting to offer an educated and supported perspective that may just shift their understanding of cannabis. I'm especially interested in helping people who think they just smoke for fun realize how they may be utilizing cannabis on a therapeutic level—whether it's the person who smokes before they workout or someone who just knows it helps them relax enough to sleep. I also have a soft spot for seniors who are learning to manage their symptoms in a new and foreign way that may seem scary and overwhelming. It's important to me that this information is accessible to them as well.”

Why do you write about cannabis?

“Being a Black woman doing the work that I do is highly political and radical for a number of reasons, but especially considering the racial discrimination that has been a part of the cannabis narrative for decades. I do this work because my voice, my perspective and my nuanced insight is necessary to balance the record. For me, sharing this information is a nod to early African American culture which was full of folk healing that utilized natural medicines and herbs due to the violent inequities in the medical industry (which are still present) that either denied them care or offered substandard services. Being equipped to offer others a way to take their health and wellness into their own hands is what informs my work. I want people to understand that cannabis is not evil or scary, just aggressively and purposefully mischaracterized. I hope seeing me advocating for responsible cannabis use opens the door for Black people who have avoided it because of how it's been demonized and linked to racist rhetoric.”

How has your perspective on cannabis and cannabis coverage changed after living abroad?

“Living in South Africa really expanded my appreciation for cannabis culture in the States. The way that we have seamlessly incorporated cannabis into all corners of living, from food and fashion to music and media, is something others are excited to try to emulate. My experience also opened my eyes to the consistent sidelining of people of color within the industry worldwide. It really blew my mind that I was in Africa and had such a hard time finding and connecting with Black people in the slowly-blossoming industry there. And when I did find the cannabis community, it was overwhelmingly white and male. It just illuminated how important it is to continue to intentionally highlight people of color in my work whenever I have the opportunity.”