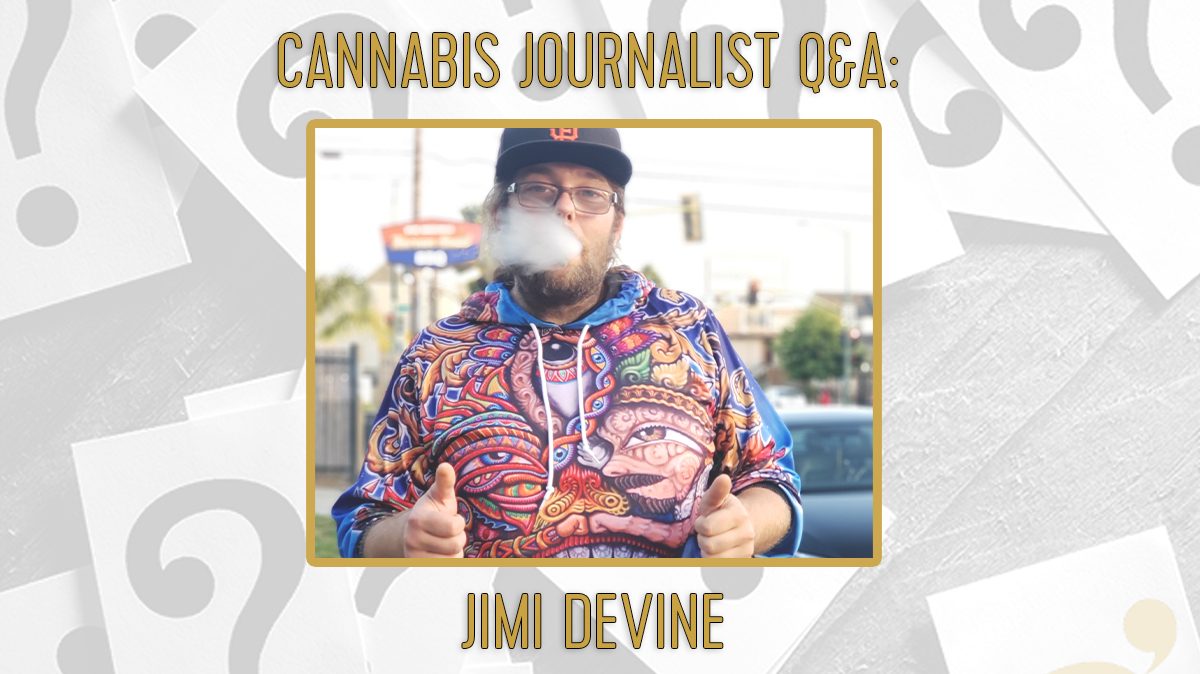 Jimi Devine uncovers the exclusive realm of cannabis breeders who are creating the world's newest strains.

Jimi Devine is a force to be reckoned with when it comes to consistently bringing an infectious, enthusiastic energy to articles displaying a deep knowledge base about cannabis cultivars, politics and culture. Known for highlighting the hypest new cannabis strains, Devine’s likeability and longtime dedication to the cannabis space affords him the connections and accountability he needs to capture the ever-evolving essence of cannabis culture in real-time.

Currently serving as a cannabis columnist and critic for LA Weekly, Devine has contributed to publications including the San Francisco Chronicle, The Village Voice, Weedmaps and Leafly, and also worked as a senior staff writer at Cannabis Now magazine. His own website, Devine’s Fine Cannabis Guide, highlights the world’s finest flowers.

He has also served as a judge for several prestigious cannabis competitions and is one of the most knowledgeable people working in the cannabis beat regarding topics such as concentrates and strain genealogy.

In a space that can often be dominated by aggregate news, Devine taps into his vast network of friends and associates and always strives for originality.

Devine got his start as a cannabis advocate with organizations such as the Drug Policy Alliance and Students for Sensible Drug Policy beginning in 2005 while he was still in college. Originally from Lynn, Massachusetts, Devine has a bachelor’s in Journalism and Media Studies from Franklin Pierce University of New Hampshire, and started working full-time in the cannabis industry at the Cannabis Buyers Club of Berkeley (CBCB) when he moved to California in 2009.

Following a favorable placement from THC Staffing Group, Devine jumped into sales for SFGate’s sister blog Smell the Truth before becoming a contributing writer. Today he is one of the most preeminent pot journalists, especially in terms of covering cannabis cultivars.

How do you track down and write about new strains? What are some new ones you are excited about?

“I’ve been following a lot of the world’s top breeders for years and generally try to keep an eye on what the little guys are up to as well, especially the ones with commercially viable terps. There are a lot of great seeds popped every year that just simply aren’t commercially viable. You start to figure out why names like 3rd Gen Family and Compound are kept in the shadows by so many larger corporate entities that buy a few packs of their seeds. Consistency over the years tends to point the compass well.

“With that being said, you’ll see things just bash their way on the scene because there’s a special kind of heat that transcends any press release or anything I could ever say about them. It just doesn’t matter because they’re that flame. The Str8organics run of Everything Bagels, a blend of Thug Pug Genetics’ Garlic Breath and Peanut Butter Breath done by @Best_Test_in_the_West, is the perfect recent example.”

Who have been some of your favorite people to interview so far?

“There are too many farmers to name. Every time someone hits me up to tell me an article meant a lot to their homie as they fight to make it in this crazy industry, it means the world to me. I’m honestly just trying to write about as much heat from as many legal operators as possible because I can’t send grandmas to trap houses, but we’ve made a few exceptions. Coming from the activism background that got me into the industry, it’s also been cool to try and give drug policy people some shine or a platform. If someone thinks I’m not a real journalist because I spent the last 16 years arguing people shouldn’t be in a cage, so be it. I’ll be OK without them.

“The past couple years with LA Weekly have certainly been fun in regards to talking to celebrities about dipping their toes into cannabis. Rick Ross was wildly down to earth, as anyone could tell from the podcast we did together. Carlos Santana was probably the funniest. We went from Bill Graham and Jerry Garcia saying he could make a buck playing guitar to whether he looked at all of his weed. He laughed and said he didn't look at all of his wine either, just two glasses.”

What area of your cannabis coverage do you get the most feedback on?

“I get the most hate mail when I write about Cookies or Connected generally, but the all-time winner for a single story is Masonic. I’ve never met someone so polarizing. The love letters and disdain were both written with the same vigor. It was kind of why I wanted to write the story. And the fact Wilson is one of the few strains besides GMO that makes things wash better for rosin yields when they’re paired with it.

“Profile pieces get the most love. Certain things about bigger-name folks you have more faith in, but it’s still great to hear someone learned something new. The stuff about the smaller operators trying to scale up gets a good bit of support. A lot of people hate articles about celebrity weed.”

Where is the next hotspot for cannabis cultivation?

“I think 90% of production will be west of the Sierra Nevada when it’s all said and done. But right now, as we watch markets open one by one, people growing weed in New York will have the most to gain in the near term. Eventually, a lot of these cultivation markets will crash and everyone will just buy light dep ounces from California with some niche indoor. Anyone who claims otherwise is just trying to cash in while they can and living in denial.”