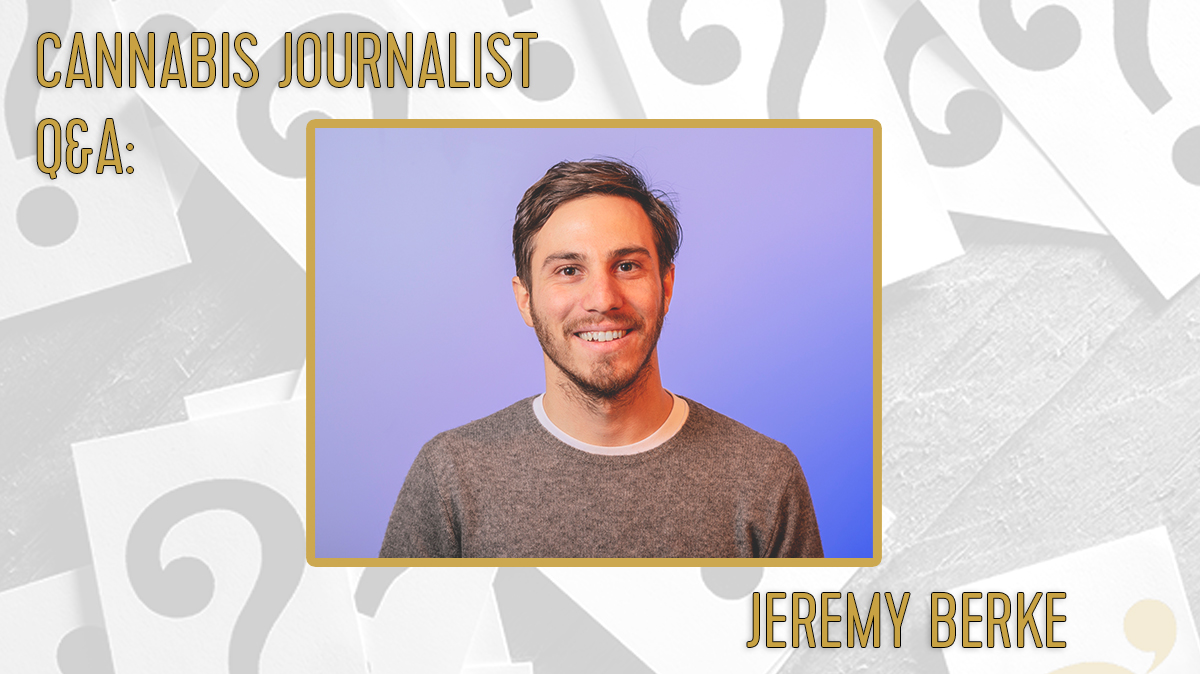 A life-changing research project abroad started Jeremy Berke on his path toward becoming a cannabis journalist.

Berke wrote a food-focused travelogue about the time he spent in Nepal that launched his journalism career. What began as something fun to do while he waited to apply for law or business school, turned into a fellowship at the online travel magazine Atlas Obscura and then a position at Business Insider.

Berke, who is originally from Toronto and is now based in Brooklyn, started at Business Insider in the fall of 2015 reporting on the run-up to the 2016 presidential election and then its aftermath. After writing a few articles specifically focused on cannabis news, Berke took up the beat full-time. He now holds the role of senior reporter and covers economic issues, from startups raising capital, to layoffs affecting the industry, to profiles showcasing just who is profiting off the plant.

How did you get started writing about cannabis?

“I was interested, obviously, in cannabis legalization. Theoretically speaking, you know, I think I can say this: I love to smoke weed. I have since I was a teenager basically, and I actually did a school project about cannabis legalization in Canada, where I grew up, in like 10th grade, so there’s a long interest there. As a news reporter, I started writing a few one-off stories. One of the first stories I wrote was in 2016 about a legal case that the dispensary Harborside won in Oakland. It was very one-off. My editor was like, ‘Hey why don’t you try writing about this and see what the appetite is?’ To their credit, they’re very quantitatively driven with what we decide to cover. Right away we saw that readers were super, super interested in cannabis and cannabis legalization and, more broadly speaking, the cannabis industry. So I built it up from there.

“I thought, ‘Hey this is a cool opportunity for a young writer. You know, not any other publication sees this industry seriously.’ So what started as a few one-off stories in mid-2016, 2017, quickly became 20% of my time and then 50% of my time. And then by the beginning of 2018 I pitched the beat to one of my editors at BI and said, ‘Hey, I’d like to get some leeway to do this full-time.’ And the rest is history.”

What types of stories are important to you when it comes to cannabis news?

“I’m an industry-focused reporter and so that, broadly speaking, can be as simple as trends in the industry. You know, who’s hiring, who’s getting laid off, what companies are doing, how companies are positioning themselves in the marketplace. All wrapped up in that is mergers and acquisitions, deals—that kind of bread-and-butter BI news flow.

“I’d say I’m particularly interested in how companies make decisions and how companies in an industry that’s as tightly regulated as cannabis make ethical decisions and what drives them to make unethical decisions. A lot of that is talking to employees on what it’s like to work for one of these companies, looking into the supply chain and figuring out if the products they’re bringing to market are safe for human consumption or not safe for human consumption, who’s in charge of making sure that companies are meeting their goals, that they’re not defrauding investors or lying to employees or unnecessarily treating employees poorly.

“So I would say that’s the kind of frame that’s the most interesting to me. I do believe that the media has a role to play in financial markets and bringing some rigor and honesty into the system. I believe that’s the chief role as a business reporter, and every decision I make—hopefully speaking and ideally speaking—flows from that standpoint.”

Do you approach your subscribers-only coverage differently than your writing on more open forums?

“I would say the short answer is yes. It can be a pain; a lot of sources want to see that their words are broadcast to the largest audience possible. That being said, having subscribers-only coverage allows me to go a lot deeper into a story than I would if I had to boil it down to what the average layman could take away because I know a lot of my readers are: A) people in the industry, or B) people at companies that might be interested in investing in the industry. They could be junior people at Wall Street banks or hedge funds, or consulting firm lawyers. So it allows me to get granular.

“I love details, picking apart interesting financial mechanisms, and so I love having the freedom to do that. With that being said, it’s sometimes a constrained audience. There are only so many people that are so interested in cannabis that they want to read 2,000 words about what happened to a company or why a company is choosing to do A or B or C. So it’s a little bit of both. The things that do appear outside of the paywall are generally ‘cannabis legalization at the federal level’ type stories. Obviously, that’s a hot, hot issue, and it’s really a hot issue in the 2020 election, so where I get to cover those kinds of stories, those generally appear outside of the paywall.”

You said before that you consume cannabis, but do you still? If so, what is your favorite way to enjoy it?

“I do. I know things are a little bit touchy because I’m based in New York, but I definitely do. I love to consume it, I’m passionate about it. I’m pretty old school though, I like smoking joints. I don’t love edibles, I do do them from time to time, but I’m pretty old school with it. I think a joint crushed up into a rolling paper is great. I also use a PAX 3 that I got. I love it. If you keep it clean you can really taste different strains, the different terpenes in the strains, so I use that as well.”