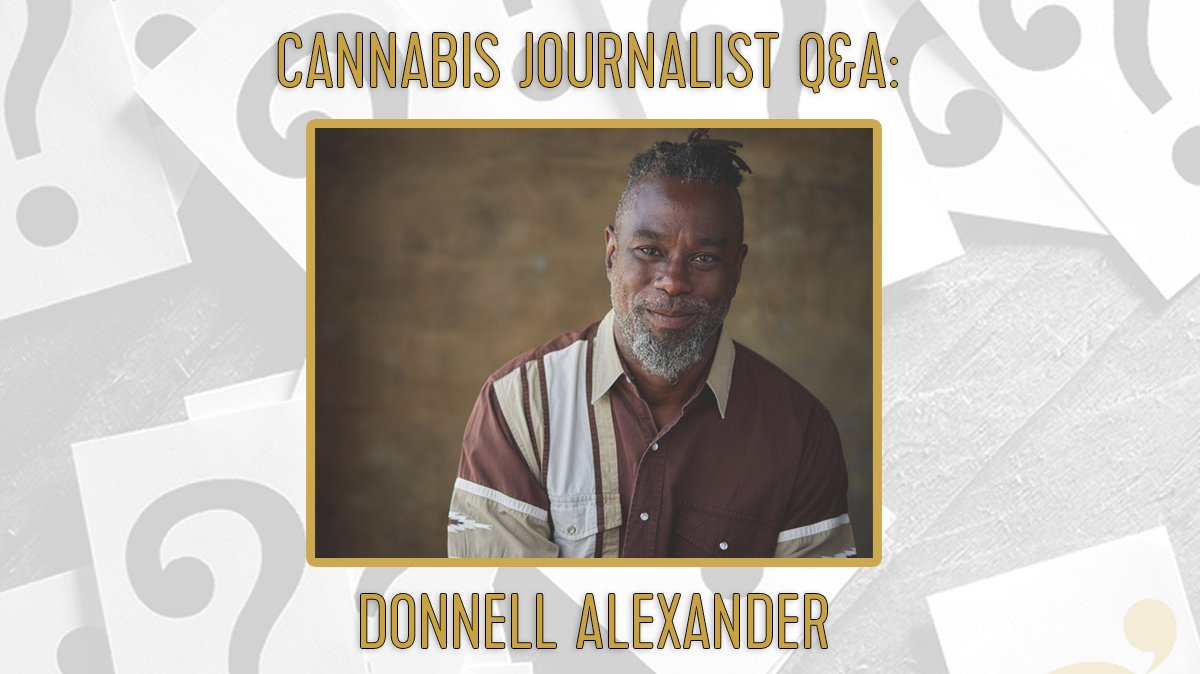 For Donnell Alexander, it seems like cannabis journalism discovered him and not the other way around.

Already an accomplished journalist with an extensive resume, including a book about West Coast hip-hop and a published memoir, Alexander is likely best known in the cannabis community as a writer and producer for WeedWeek. There, he has interviewed some of the cannabis industry’s most prominent players via podcasts and articles, pulling from his background as a longtime cultural critic and storyteller.

Alexander’s cannabis-focused journalism began with Leafly in 2017. At that time, he explains he was working for the community- and equity-driven organization Oregon Humanities, “facilitating dialogues about hip-hop in the Pacific Northwest and supplementing that with freelance journalism.”

“This was at the dawn of legalization,” he says. “I can remember taking public transit to Vancouver (Washington) to cop some of my first government-approved cannabis.”

In the winter of 2018, the progressive Los Angeles news site Capital & Main offered him a fellowship to write about cannabis legalization, and in a series co-published by Fast Company, he dove deep into topics such as equity programs and the life of trimmers, and also profiled Bryant Mitchell, a Black cultivator. By that summer, he was pitching a series of long-form audio narratives based in the cannabis world when WeedWeek editor Alex Halperin reached out to ask him to join his team. Alexander says the more than two years he spent with WeedWeek were the most enlightening period of his career so far, noting his access to psilocybin may have played a role in that.

As for what’s next, Alexander, who cut off all his hair during quarantine, is being slightly tight-lipped, but says he has a new book in the works.

What are some of your favorite words for cannabis? Why?

“Gas, because it’s new-ish slang and I enjoy the evolving nature of American English.

“Mary Jane, because the Rick James song was a huge song in Black America when I was 12 and only beginning my cannabis journey.”

Where are some of the most interesting places you've traveled for a cannabis story?

“I like seeing grow operations, both illegal and government sanctioned. My thing is to contrast what I see with my brief stint as a trimmer 10 years ago. Too, I like watching industrial processes such as extraction manufacturing. The way these processes related to the existing world of manufacturing deeply intrigues me.

“In 2018, I traveled to Seattle to record with Chelsea Cebara, formulator of Velvet Swing, the first water-based THC lubricant. She was sharing facilities with another cannabis company and the space was full of construction noises and organized busy-ness. This was one of my first inside looks at cannabusiness beyond the illicit market. The everyday pleasantness eradicated any expectations of grubbiness and unprofessional behavior that some of the early, shady California dispensaries had set up for me.”

How do you think mainstream publications get cannabis coverage wrong, and what are they doing right?

“Great question. Mainstream publications still tend to treat pot as though its legitimized presence in society is somehow up for debate. As a writer I find that the dynamic makes getting into stories quickly all but impossible. They remind of Civil War vets you’d find in southern mountains, in the 1880s … my favorite COVID-era non-joke is that sympathetic Alex Berenson coverage launched him to bigger and better bilks.

“Sometimes the reporting that lands in the hands of editorial skeptics isn’t just off. Sometimes the material doesn’t see print at all. My sense is that this is less true in lifestyle coverage than in actual policy areas. Last year a major media outlet paid me to write about social equity. I rewrote my stuff a couple of times, but my editor somehow couldn’t see my work as publishable.

“The mainstream media is the indisputably best way to reach the masses. That’s the best I can say about them where pot is concerned. Centennial Media should have published three honest magazine pieces of mine out before summer.”

Who are some notable people you have interviewed and who would be your dream interview?

“Alex Halperin and I had Ehrenreich on the widely-missed WeedWeek podcast. The sound sucked, but our conversation was a gas. We’ve had Steve DeAngelo on as well as social equity players who are going to be key, like Karim Webb, Amber Senter and Al Harrington. Shaleen Title is a legit pioneer. And Ophelia Chong is someone I’ve recorded repeatedly and found enlightening every time.

“Honestly though? I get the most out of the talking with product innovators, and they tend to be more low-key. Traditional market figures are compelling interviews, almost always.”