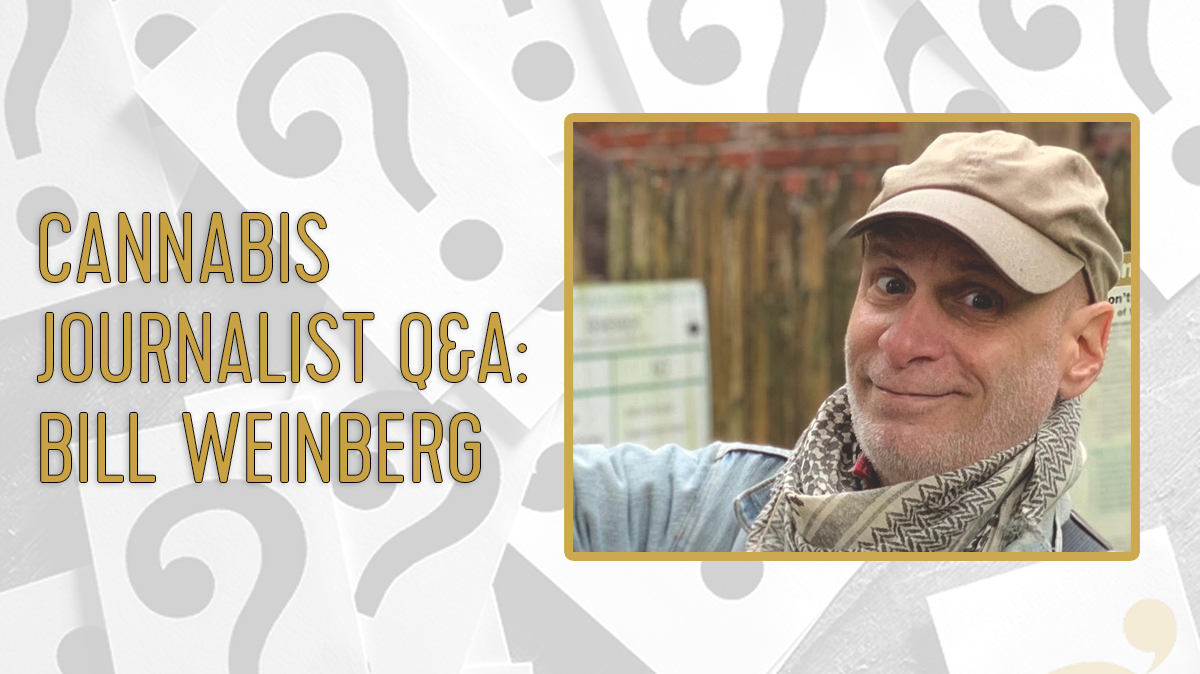 Reading much of Bill Weinberg’s work in cannabis journalism will provide an idea as to where his background lies. Weinberg, who served as the news editor of High Times during the 1990s and continues to write for cannabis news sources such as Project CBD and Cannabis Now, is an award-winning 30-year veteran journalist in the fields of human rights, drug policy, indigenous peoples, ecology and war.

Weinberg’s efforts to cover the drug war and marijuana legalization movement expand outwards on a global scale, with a frequent focus on Central and South America. He is the author of Homage to Chiapas: The New Indigenous Struggles in Mexico (Verso Books, 2000), and War on the Land: Ecology and Politics in Central America (Zed Books, 1991), among other titles. He is also currently working on a new book about indigenous struggles in the Andean nations.

As a correspondent and contributing editor for Native Americas, the quarterly journal of hemispheric indigenous issues published by Cornell University's American Indian Program, Weinberg won three awards from the Native American Journalists Association for his reportage from Mexico, Nicaragua and Arizona between 1996 and 2000.

He’s also written a global guide to cannabis culture around the world in Cannabis Trips: A Global Guide That Leaves No Turn Unstoned (Ivy Press, 2010).

Like many cannabis journalists, Weinberg has a rebellious nature and firmly believes in the freedom of the press. For 20 years, he was the primary producer of an anarchist-themed talk show on New York’s WBAI, the Moorish Orthodox Radio Crusade. He is based in New York City and now devotes much time to his website and podcast, CounterVortex.org, where he monitors the war on terrorism.

How is your cannabis coverage different than the other subjects you cover as a journalist?

“Fundamentally, it isn't. I prefer to emphasize the links between cannabis and other areas that I've covered. I reject the ghettoization of cannabis journalism, which reflects the single-issue focus of too many cannabis activists. I'm heartened by the increasing emphasis on questions of social equity in the cannabis community, and I try in my journalism to draw the connections between cannabis and related issues of racial and economic justice, human rights and ecology.”

What areas of cannabis coverage appeal to you most? Why?

“Again, what most interests me is exploring the intersection between cannabis liberation and broader questions of social justice. Just to draw an obvious link to the incident that sparked the national uprising we now witness... We now see the narco-stigma being employed against George Floyd, with the assertion that he had been using meth—as if that makes any difference to the moral equation whatsoever. And many of the police killings of unarmed Black youth that we've seen in recent years across the country have been linked, one way or another, to cannabis. Most notorious here in New York City was the case of 18-year-old Ramarley Graham, who was shot dead in his own home in the Bronx in 2012. He was killed by an NYPD officer who had followed him into the apartment after supposedly witnessing him engaged in a street deal. He was shot while attempting to flush his stash of cannabis down the toilet. The officer who killed him never faced charges. The case, which I covered for High Times, helped spur the convergence of cannabis advocacy and a #BlackLivesMatter consciousness.”

How has cannabis journalism evolved during your time on the beat?

“To an extent, it has broken out of the ghetto, as the issue has gone mainstream, and even taken on something of a cachet. But there's still a certain double standard, where if a writer for the New York Times or The Nation does one story about cannabis, it's a mark of edgy creds, while those of us who cover it steadily continue to face a degree of stigma.”

Who is your audience? Who are you writing for?

“Inevitably, my core audience is the cannabis community—those involved in the plant one way or another, primarily as advocates and activists. But I try not to limit my audience to this community, but to be accessible and of interest to the broadest audience possible. And by this means, I try to actually expand the cannabis community—if we use that term to mean not only those who use the plant, but also those who understand why it must be liberated—and show that this is a real, serious political issue.”

As you report in the field, where has cannabis journalism taken you?

“Certainly throughout the Americas, and a little beyond. In 1993, I went to Kentucky to cover the case of Gary Shepherd, a local grower who was killed by the state police in a raid on his home. The following year, the Zapatista rebellion broke out in Chiapas, Mexico, and for the next several years I was making frequent trips there covering (among other things) the use of anti-cannabis operations to mask counter-insurgency. During those same years, I made repeated trips to Northern California's Emerald Triangle for harvest season and visited growers on Hawaii's Big Island. Since then, I've reported on drug war militarization and cannabis legalization efforts in Colombia and Peru. My last trip abroad was to Italy in late 2018, actually to visit family, but I also did some reporting on cannabis and the alternative scene in the southern region of Calabria. I'm looking forward to returning to Latin America, when the current pandemic-related travel restrictions are lifted. Meanwhile, there is plenty going on here in New York City to keep me very busy, with ongoing racist policing and a big push for legalization with equity.”