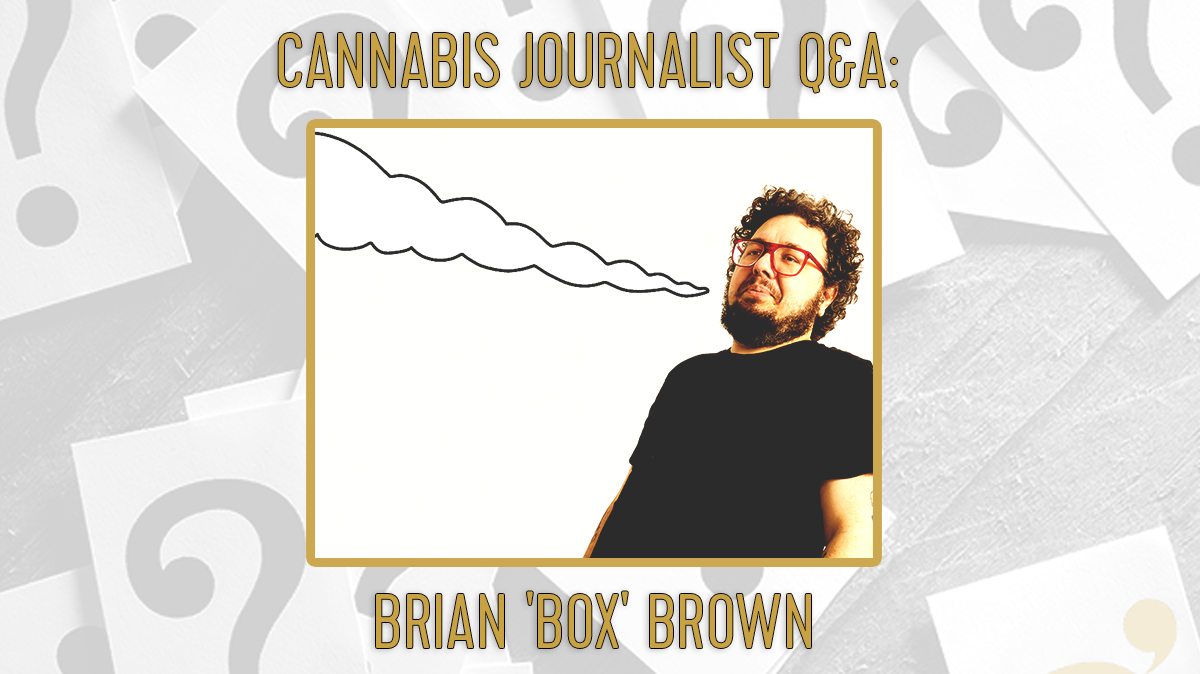 Brian ‘Box’ Brown uses his experiences as a cannabis patient to showcase who is dialed in and who is shut out when it comes to legalization.

Editor’s note: Grasslands’ Cannabis Journalist Q&A blog series—introducing us to some of the most important and dedicated journalists on the beat—is curated, reported and written by Oakland-based journalist Ellen Holland, former Senior Editor of Cannabis Now magazine, San Francisco Chronicle freelancer and Chief Editor of multiple Ed Rosenthal books, including The Big Book of Buds Greatest Hits and This Bud’s For You. Her book Weed: A Connoisseur’s Guide to Cannabis explores flavor profiles, strain families and the myriad of ways to appreciate the world’s most favored flower.

When it comes to cannabis journalism and storytelling in general, Brian “Box” Brown takes a different approach. The cartoonist, illustrator and comic publisher’s works have appeared on The New York Times’ best-seller list and garnered Eisner and Ignatz awards. Brown, who lives in Philadelphia, also creates a daily web-comic called Legalization Nation that showcases both his personal experiences with cannabis as well as political happenings.

Brown has been a cannabis enthusiast since he was in his teens. While very much unappreciated, he says his arrest for cannabis possession while he was still in high school gave him a firsthand look at the legal system and likely increased his interest in the plant.

These days, he has a new perspective on cannabis, one shaped by the changing laws and regulations across America. While he was working on his book Cannabis: The Illegalization of Weed in America, released in 2019, he signed up for the Pennsylvania medical cannabis program.

“It was the restrictive, corporate Pennsylvania program that actually radicalized me and got me into activism,” he says. “While I was working on that book it struck me that I couldn’t cover the current goings-on with legalization in the graphic novel format. The reality is that the publishing world is too slow. Any book covering legalization would inevitably be outdated by the time it was released to the public.”

This led him to create the regular comic strip Legalization Nation.

“This allows me to bear witness and discuss what is going on while it’s happening,” he says. “Legalization Nation has actually opened doors for me to do actual political advocacy and lobbying as a patient and consumer with my local representatives.”

Brown’s graphic nonfiction books have been featured in The New York Times, The Boston Globe and countless other publications, and he’s also had comics published in Leafly, Playboy and New York Magazine. His illustrations are featured in a forthcoming book, Accidental Czar, a biography of Vladimir Putin written by Andrew Weiss, a Carnegie Endowment expert on Russia, which will be released by First Second Books in 2022.

How can comics cover cannabis in a way that traditional journalism cannot?

“It's hard to quantify what makes comics uniquely suited to conveying important and even complex information in easy-to-digest pieces. There is a reason why the emergency instructions to evacuate a plane are basically a comic. Seeing the visual just helps people understand, it draws the reader in. It's something people often call ‘the magic of comics.’ ”

What was the first cannabis-themed illustration you drew, and what areas of covering cannabis do you like to focus on?

“Hard to know what the first one was. I definitely pitched the history of cannabis prohibition as a graphic novel just after my book Andre the Giant: Life and Legend came out. But my publisher wasn’t as interested at the time and I ended up doing a book about the history of Tetris. As the culture surrounding cannabis started changing I think my editors came around.

“I don't think a day goes by that I don’t hear, see or read a story in the mainstream news about cannabis. It’s all over, and honestly I don’t think I was seeing the coverage that I wanted to see.  There was mostly talk about how much money the state systems were making and stories about children who need cannabis and children who accidentally took too much cannabis, etc., etc. I was really looking for something focusing on the amount of corporate and regulatory corruption I was witnessing as a patient in Pennsylvania; the vast disparities between state systems and who is benefiting from legalization and who is not, etc.

“Legalization Nation focuses on legalization from a patient / consumer / working class / small business / traditional market perspective that I think was missing from cannabis coverage. Here I am, a Pennsylvania medical cannabis patient in a restrictive corporate system. What does this mean for me and others like me? What are patients and consumers actually doing? What are the large multistate operators who’ve seized control here actually doing? What I’ve found is that there are a lot of other patients and consumers like me in Pennsylvania and many other states who are dealing with these same issues who need a voice.”

“Not politicians, I'll tell you that much, sheesh. I watched a lot of pro-wrestling in my day (wrote a few books on the subject) and nothing makes me feel more like I’m talking to a pro-wrestler than when I talk to politicians. It’s extremely strange. Not something I’m used to. My favorite people to talk to are cannabis patients, whom I often connect with personally. I really like to shine a light on how people are using cannabis to treat their conditions and make their lives more livable.

“I also like to focus on small businesses who are being shut out of corporate cannabis systems. I like connecting with local farmers and hash makers who are eventually going to be the backbone of the American cannabis industry (ask any Canadian about subject-matter experts.) I love to connect with other activists. It’s unfortunate how this has been a state-by-state issue because it forces activists to fight 50 individual battles instead of one big one. We're all fighting the same fights, and in many cases against the literal same entities.”

How has the comic world reacted to your cannabis coverage?

“I think the comics world has embraced it. I've gotten to hear from a lot of my colleagues who are medical patients and consumers. It turns out cartoonists suffer from a lot of the same work-related injuries and benefit from therapeutic use of cannabis.”