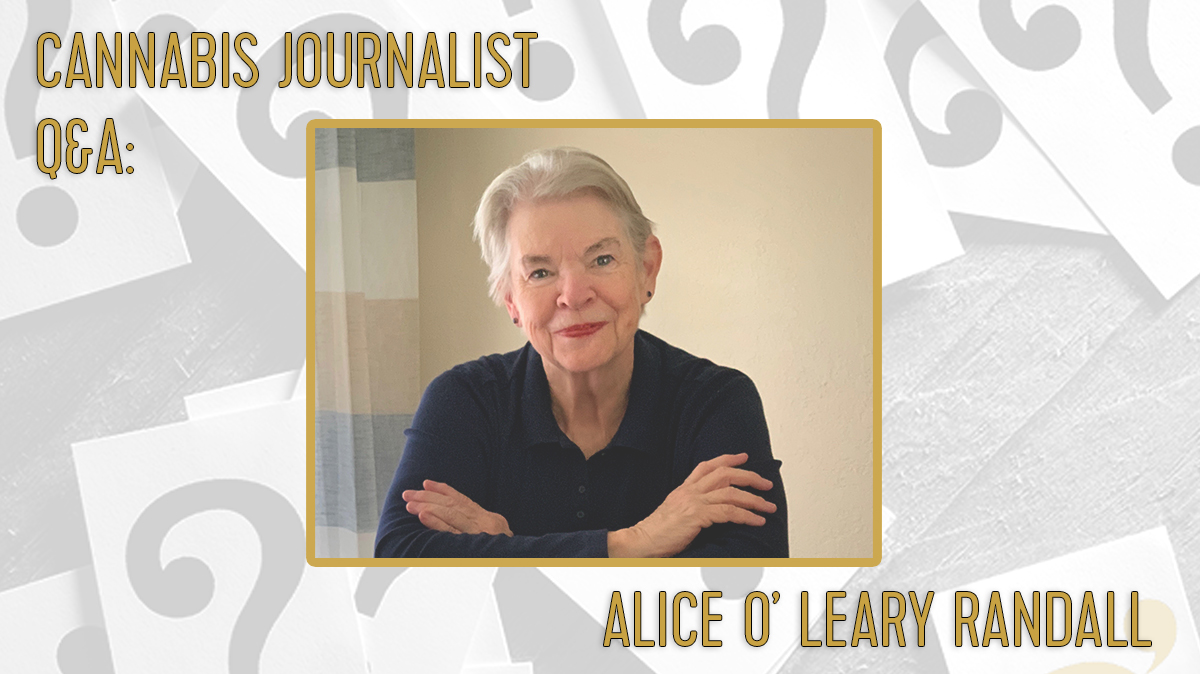 The work Alice O’Leary Randall has done in the cannabis advocacy space has undoubtedly changed the course of the plant’s trajectory toward becoming accepted as an efficacious medicine. O’Leary Randall’s late husband, Robert Randall, was the first person in the U.S. to legally receive marijuana grown by the federal government for his own personal medical use, an action that set O’Leary Randall on a path that now includes more than 40 years of activism.

As a cannabis journalist, O’Leary Randall has contributed to publications including the Huffington Post, High Times and Cannabis Now. She’s also written two recent books, Medical Marijuana in America: Memoir of a Pioneer in 2014 and Pain-Free with CBD in 2019 with co-author Eloise Theisen. O’Leary Randall’s many accomplishments also include a career in nursing, and she continues to pull from that background in advocating to expand access to medical cannabis, a fight she began decades ago.

In 1975, O’Leary Randall and her husband were arrested for growing marijuana on their sun deck in Washington, D.C. Then, the unbelievable happened: Together they were able to convince a federal court that Randall’s use of marijuana was a medical necessity to treat his glaucoma, and he went on to obtain legal supplies of marijuana the federal government grew primarily for research purposes.

But that personal gain did not go far enough. The couple’s activism helped propel a movement to enact laws recognizing marijuana’s medical value and efforts to establish state-sponsored research programs.

In 1980, they founded the Alliance for Cannabis Therapeutics (ACT), the first nonprofit organization dedicated solely to the therapeutic applications of the cannabis plant. ACT drafted national legislation to legalize cannabis that was derailed by the “Just Say No” campaign, and in the late 1980s also served as one of the primary plaintiffs in historic hearings before the U.S. Drug Enforcement Administration in efforts to prove marijuana’s medical utility. ACT was actually successful in convincing the DEA’s chief administrative law judge, Francis Young, that cannabis should be removed from its classification as a Schedule I controlled substance, but the decision was overruled by DEA administrator John Lawn.

Also around that time O’Leary Randall founded Galen Press, which compiled and released information associated with the DEA’s marijuana rescheduling hearings. In 1998, the couple published a book about their experiences titled Marijuana Rx: The Patient’s Fight for Medicinal Pot. After Robert Randall passed away in 2001, O’Leary Randall became a nurse and turned her focus to that career. She returned to cannabis advocacy in the 2010s, serving on the American Cannabis Nurses Association Board of Directors and the scientific advisory committee for the Australian organization United in Compassion. From 2004 until April 2020 she also was the executive editor of Mary’s Cannabis Primer, which was put out by Mary’s Medicinals in order to educate people on the wide applications of cannabis as a medicine.

Where do you think the conversation about marijuana as a medicine is headed?

“There will be a lot more talk about cannabis-derived medicines, such as Epidiolex. This is a confusing term to the general public, which views products in dispensaries as  ‘cannabis-derived.’ But researchers mean a careful isolation of various cannabinoids that are then subjected to U.S. Food and Drug Administration-approved study. We have already seen that cannabis-derived medicines can make it through the FDA process and most physicians are willing to wait because the end product, an Epidiolex or Sativex, are tested and packaged more like conventional medicines. Most physicians are very uncomfortable with the use of natural cannabis and / or the products developed for the dispensaries.

“There will also be more discussion about the prospect of cannabinoid therapy as a subspecialty of medicine, much like we have cardiologists and pulmonologists and a dozen more specialties. There is already a name being used—endocannabinology. The Society of Cannabis Clinicians and the American Cannabis Nurses Association are both thriving, with membership growing steadily. It may take a while for the specialty to truly emerge but I think you will hear more and more talk about it.”

“The cannabis issue is amazingly complex and while there is a growing number of dedicated and serious cannabis reporters, there are still many who come to the issue armed only with a Cheech & Chong approach. This has the net effect of continuing the bias and trivializing the issue. This can often be seen in news reports that treat medical cannabis as just another angle to the general legalization story. Several states have fueled this misconception by folding medical cannabis programs into general legalization control. An example is Washington, where the medical cannabis program is now controlled by the Liquor and Cannabis Board while the Department of Health controls the Marijuana Preventions and Education Program. That is so backwards and should be reported as such. Too many cannabis journalists have failed to understand the fundamental difference between medical cannabis use and social use, as well as the nuances that exist in this issue.”

How has your writing changed as cannabis evolved from an activist issue into an industry?

“Personally, this evolution has complicated my writing. In the ‘early days’—and remember I have been writing about cannabis for more than 40 years—it was a matter of providing factual information about cannabis and its history. It was important to reeducate the public about basic cannabis facts, explaining repeatedly the difference between THC and the other cannabinoids, or how cannabis became illegal as a result of racism and prejudice. And, there was just one target: the federal prohibition of cannabis.

“Today, of course, there are dozens of state laws, each slightly different than the others. The general public’s knowledge is far more sophisticated with regard to their basic understanding of cannabis. But, as they say, a little knowledge can be dangerous and I feel the public has a little cannabis knowledge, but not enough to understand some of the big changes that are occurring. This makes it inherent on those of us who write about the issue to help the public understand that cannabis is a huge industry now.”

Who are the major players in cannabis to pay attention to?

“There are so many ‘major players,’ many of them self-described. Of course there are the major industrial players such as Canopy, Tilray, Aurora, etc. With millions of dollars at stake these large cannabis companies are subject to tremendous financial and regulatory pressure. It takes a special kind of reporter to ‘follow the money’ and make certain these companies are operating on the up-and-up.

“Researchers are the other major players at this point, and it is really exciting to hear their presentations at the numerous conferences around the globe. That makes the International Cannabinoid Research Society (ICRS) a truly major player since it provides the researchers with a reputable platform from which to present. Similarly, there are smaller platforms such as the Institute of Cannabis Research in Pueblo, Colorado, and The Lambert Center initiatives in Philadelphia and Sydney, Australia, etc. These organizations are channeling state and private funds into cannabis research that will really start to pay off in a few years. The next decade should be amazing when it comes to cannabis.”